I love how the front springs make it look like there's no engine in what should be a FWD car. So awesome, Larry. You guys are doing great work there.

is that romex for the kill switch wiring?

so how's it drive with two different transmissions?

Ahh, that sounds like a much better idea than romex

I love how the front springs make it look like there's no engine in what should be a FWD car. So awesome, Larry. You guys are doing great work there.

Thanks. Yeah, we have some ride height issues. We put in Audi and Volvo springs, cut shorter than stock, but obviously they only compress to higher than stock up front. Stiff. I don't think we'll take time to change it before the race unless we observe some really bad handling characteristics.

is that romex for the kill switch wiring?

so how's it drive with two different transmissions?

And as far as driving, we expect the same experience as the MRolla. Mulry got this footage last year:

When driving a single-engine manual transmission car, there is typically a very close connection between the speed at which things go by, the sound that the engine is making, and the gear that you are in. That video reminds me (I haven't watched it in close to a year now) that the toughest thing about driving the MRolla was the odd disconnect among those three factors. As you can tell, I would find myself not feeling like the car needed to shift, but the red light was telling me to do so anyway. It definitely took some adjusting to get used to that disconnect factor.

But it was a fun car on track. Really fun.

given that, is there any particular reason you went with mis-matched transmissions again? instead of two matching manuals or two automatics?

don't get me wrong, i think the car is pretty epic, i'm just curious.

Just because it's easy to build and drive.

So here's some in car footage. First a very poor quality and boring clip of the first road test. The rear automatic was not shifting and we had plenty of bugs to squash still.

Then after things were mostly sorted, you can better see the potential of the car.

that really looks like it would make an awesome DD with some interior work. the car really looks easy to drive in that 2nd video.

that really looks like it would make an awesome DD with some interior work. the car really looks easy to drive in that 2nd video.

The biggest problem to a daily driver version if you don't mind uglified dash and gauges, would be locating the shifters. If you had two automatics they would be easy to link both to one lever. With the manual & automatic, an option would be to fabricate a smaller automatic lever that would be less intrusive to the passenger space.

This assumes you live in a state that would tolerate such a vehicle.

The final work weekend is over. We're a bit tense and overwhelmed, feeling less prepared than we are for most races. There are a few final tasks that we're going to attend to at the track. We load tomorrow. We've been hunting brake bugs and cooling pressure leaks. We cut another coil out of the front springs to bring the nose back down from orbit. We broke a welded rear spring so switched back to stock in the rear. Cars are painted but not really themed yet. The FX needs to be aligned but the engines are sounding good. It is fast.

I like the anti-rollover flaps on the roof of the FX32. Good luck guys!

The FX needs to be aligned but the engines are sounding good. It is fast.

Just before we loaded it on the trailer tonight. Hauling to Sonoma California Thursday.

The race: Snowed like crazy the morning we left. Roads were starting to get treacherous just as we left, but away from Salt Lake everything was beautiful the rest of the weekend. Car was looking like a glazed donut by the time we got through Nevada. 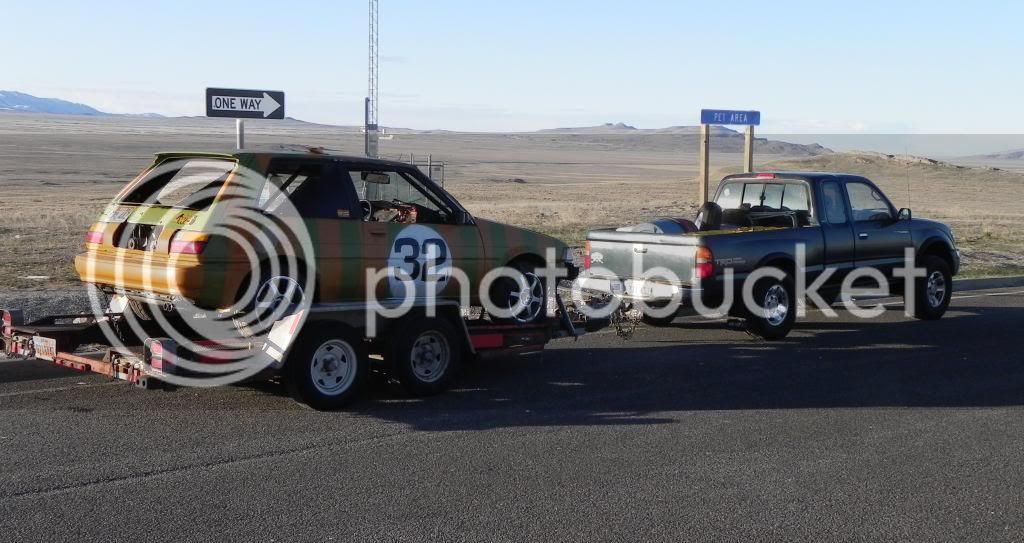 On track the FX32 was lifting the front corner and spinning out of turns. We had attempted unsuccessfully to modify stiff junkyard spring on all corners but before the race switch back to stock MR2 rears. This cause the rear to really sag under acceleration, and the stiff front springs would cause the car to pivot and lift the inside front. After testing we decided to put AE92 Prizm GSI springs in front, which planted the wheels better, but allowed a lot of roll. You can see the VW Vanagon has less roll than the FX.

Early in day 2, during my stint I noticed the rear temperature starting to fluctuate, indicative of imminent overheating. I brought it in and the stock water pump was leaking. We could not stop it so ran the rest of the day on just the front motor.

We had been moving up on a class win, but with one motor, other cars started move up on us in the standings. As I mentioned previously, there was some drama on the last turn. 40th overall in a field of 174, top 25%, is a great debut.

Damage from the hit at the end:

Our theme was supposed to be Tweedle Dee and Tweedle Dum, with the stripes and propeller hats. We had put propeller hats on the cars, but after one test lap we removed them due to the how incredibly loud they were.

A couple random shots of the cars:

Wow... looks like somebody introduced some rear steer to your setup.

I hope it's easily repairable!

Yep. We think it will live. Anyone have a spare 85-86 MR2 rear suspension laying around? Our spares are all 87+.

Yep. We think it will live. Anyone have a spare 85-86 MR2 rear suspension laying around? Our spares are all 87+.

Do you even need to ask? What do you need?

I've been working on getting this together for a while. I very pleased with the results. Time-lapse of the entire build.

This week we race the FX32 for the second time. This time we go to High Plains Raceway in Colorado, one of my favorite tracks: http://www.highplainsraceway.com/track.html

We've goofed around a bit with the suspension. We had run stock MR2 rear and AE92 front springs, which was silly for such a heavy car on a race track. Now on each corner we basically created a dual coil from more stock springs and cut them down. We have no idea how it will handle.

Also found some better wheels. They were hideous and only $150 for the set, but look OK with a little sanding and Rustoleum.

We also capped off the rear water pump housing and will rely one the electric pump.

And then you took home the class B win. Congrats and well done!

I'm the doctor who is a wife. Which makes the grease hard to explain to my patients... www.tetanusneon.com.