Surprised no one has talked about their race at NHMS last weekend.
Anyway, here's the recap of the Lonesome Valley team, running the #38 VW Jetta...

The Jetta had run in about 6-7 Lemons races in the past. But it was our 1st ever Lemons race, and the 4 of us (Phil, Paul, Matt and myself) were excited, nervous, anxious, etc. to be there. 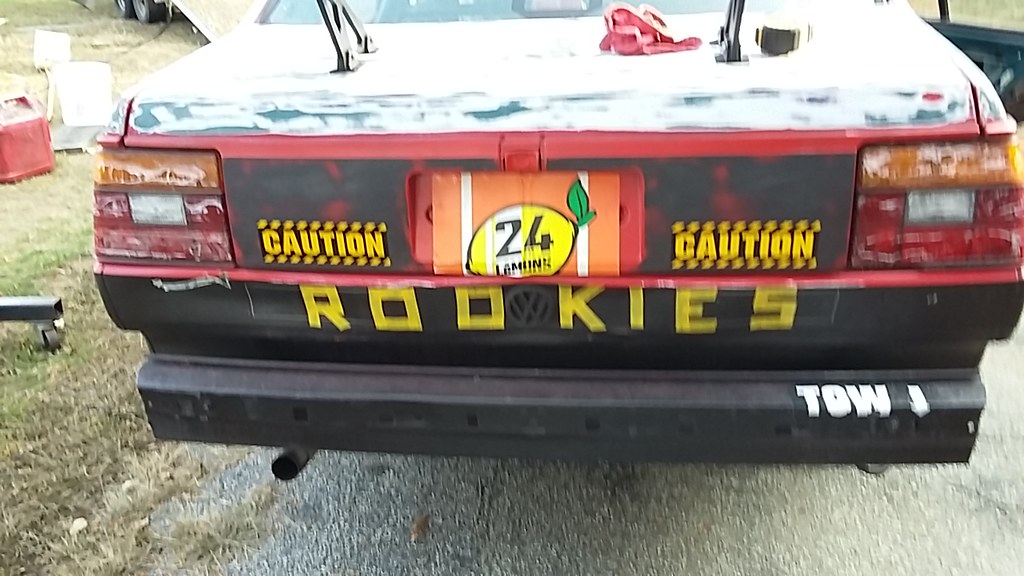 We had fought with a sputtering motor the whole week leading up to the race, and it was still sputtering when we practiced on Friday. As a result, we only got 3 laps in.
Saturday morning, we were still fighting the sputtering. Then I finally found on a VW forum where someone had a similar issue, and stated the problem was the coolant temp sensor. So Matt reached over and unplugged the wires from the sensor. Danged if that didn't smarten the motor up. It ran great the rest of the weekend. 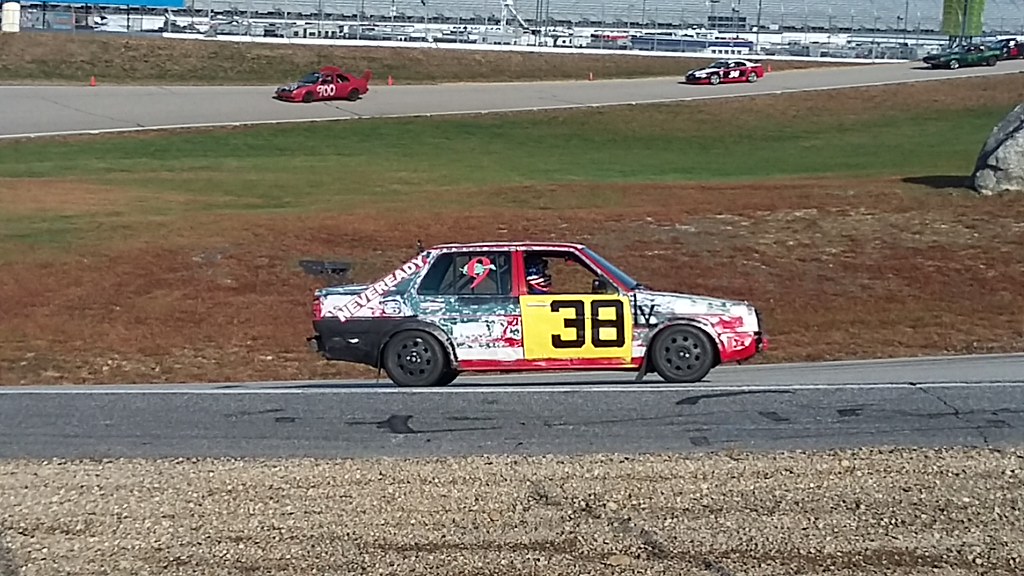 We finished Saturday in 67th place overall, and just plain happy we were still running. No black flags and no off track excursions. Just plain old having fun. We went about changing the oil and rotating the tires. Phil pulled off the left front tire, and we got a surprise.... 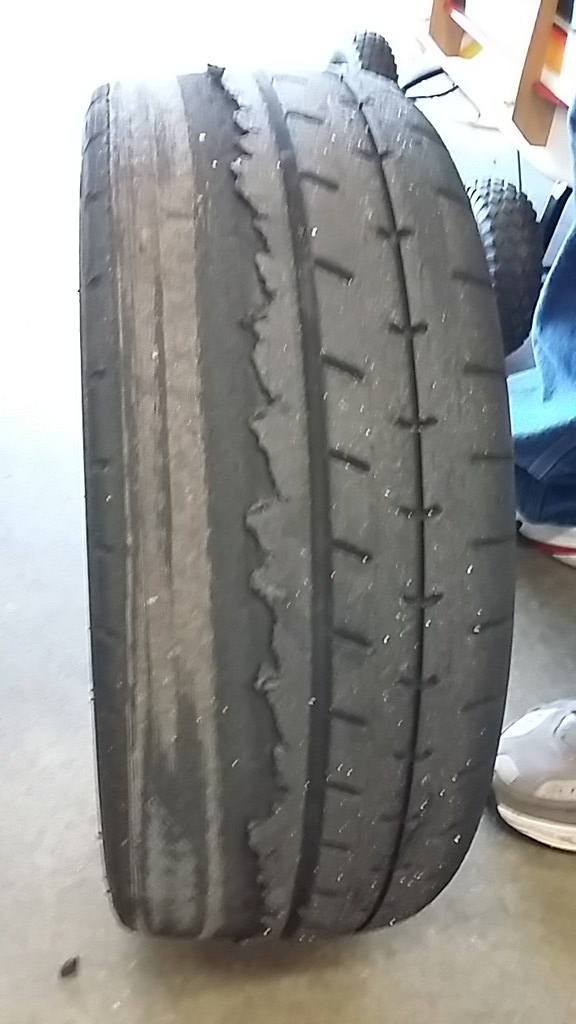 Yeah, a brand new Yokohama tire, and the inside rubber is gone. After a bit of discussion as to why this happened, our best guess is we ran with the tire pressure too high (40 psi), and with the suspension bottoming out coming down off the hill into the righthander, the tire was not able to handle it.

Sunday, we switched over to a used set of Dunlops, and lowered the pressure to 30 psi. To our surprise, they ran just as good as the new Yoko's, and Matt even ran the best lap we had for the weekend, getting a 1:33.9. I did have an off road excursion coming out of the carousel, and from the looks of the gravel, quite a few other cars did as well...lol. I went to the penalty bay, and was greeted with a big smile from the fella in the kilt (Ray?) After a little explaining, he let me back out. As the day went on, we were gradually moving up in the standings, getting up as high as 54th when it happened. The right rear spindle (or axle stub) broke just before pit road. Paul was able to get the car onto pit road, but the tire continued on, hit the outside wall on the front straight which sent it directly back into traffic. Quite a few cars managed to miss it, but the #41 car wasn't able to. The tire then got sent down pit road, where it finally stopped. So with that, our day was done, as was the #41 Honda (sorry guys). 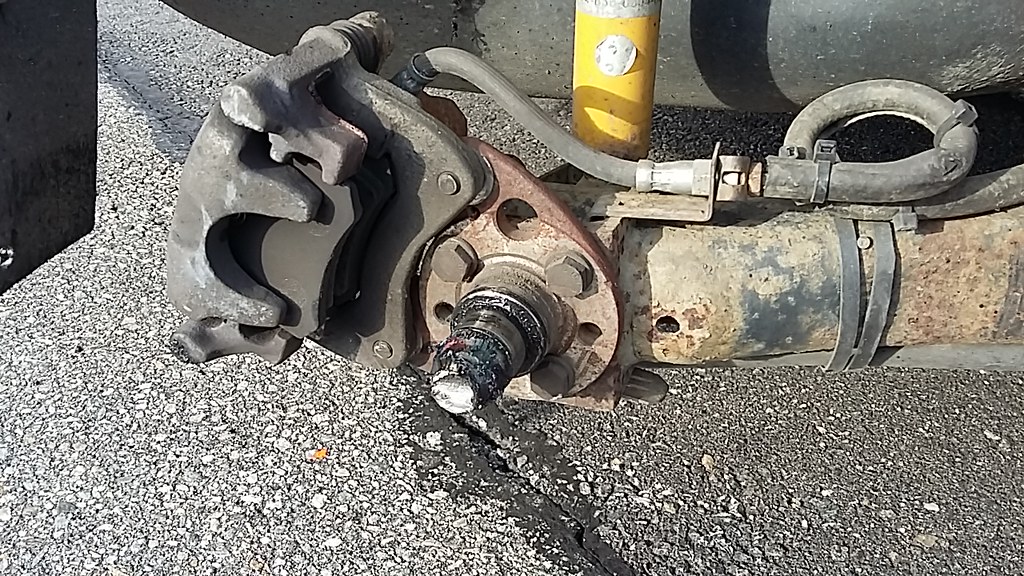 When all was said and done, we ended up 62nd overall, and 23rd in the B class. As much as we were disappointed we didn't finish the race, we all felt we had done well, and for sure we all had a blast. We were pitted in the #1 stall of the north garage, next to the mean looking 914 Porsche with the Chevy LS1 motor. As we were packing up, they came over and presented us with a nice gift, saying they enjoyed how we had so much fun the whole weekend. 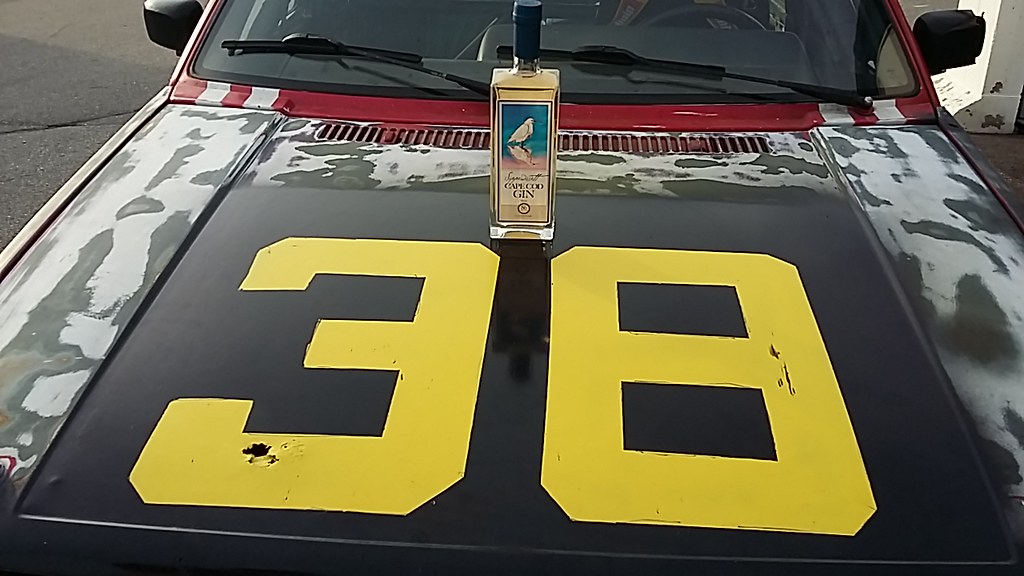 It's now been a week since the race, and the 4 of us are still talking about how much fun we had. And yeah, we're planning to go to New Jersey in June..... lol

Enjoyed having you guys on the track.  Sorry about the axle/spindle fail.

Howdy, neighbor! We ran the OnlyLamms.com Subaru in the garage next to you.

You guys were great neighbors and seemed to really get this brand of shenanigans. Thanks for the coffee, and we hope to see you at more events!

"We gon' rock it til the wheels fall off."

-Dre. Dre and you guys, apparently