I go simple. Put the battery and alternator output on one pole and everything else on the other.  When you throw the switch the alternator just dumps into the battery.  No nuked alternators in last 10 years. I'm guessing your alternator is getting nuked as its output is not being properly dealt with after the switch is thrown.

Why does everybody insist on interrupting the positive terminal of the battery?  This is a horrible way to interrupt the power of any 12VDC electrical system.

The only reason to  interrupt the positive terminal is if you only have the one main set of terminals, which would require running the alternator to the positive battery terminal and then interrupting both.

If you are willing to spend the extra ten bucks on a shutoff switch with a secondary pair of terminals, it is infinitely safer to interrupt the negative terminal. In order to shut the system down you could... you know... use the same damn line that you otherwise normally shut the engine off with (like, you know... the IGNITION switch!) and run it in series with the secondary switch.

All these extra provisions for load dump resistors and what not are completely unnecessary. It's way easier than you think.

The best part about interrupting the negative terminal is the failure mode. If the negative battery terminal comes off the switch and / or is shorted out in an impact, you've done nothing more than complete the normal circuit. Big whoop. If you were instead switching the positive terminal, you suddenly have a MASSIVE fire risk as you battery cable is now arc welding itself to your cage.

Silly question, did you make sure the resistor is on the right circuit on the switch?

You have it drawn the same as the picture on the Lemons store. But I think i've seen other brands that want the alternator dump on the second circuit. I've always tested with a multimeter before connecting wires to make sure I put them in the right place.

The Cheap kill switch "with alternator protection" from Racer Parts Wholesale is different from the more expensive one "with alternator protection" from Pegasus Auto Racing Supplies even though they look the same. It takes me a while, but I can FINALLY (sometimes) wire in my own kill switches after 10+ years of building Lemons cars. But it takes me a while to "get in the zone" which usually begins with me checking continuity between the different poles on the kill switch in the closed and open positions.

I go simple. Put the battery and alternator output on one pole and everything else on the other.  When you throw the switch the alternator just dumps into the battery. 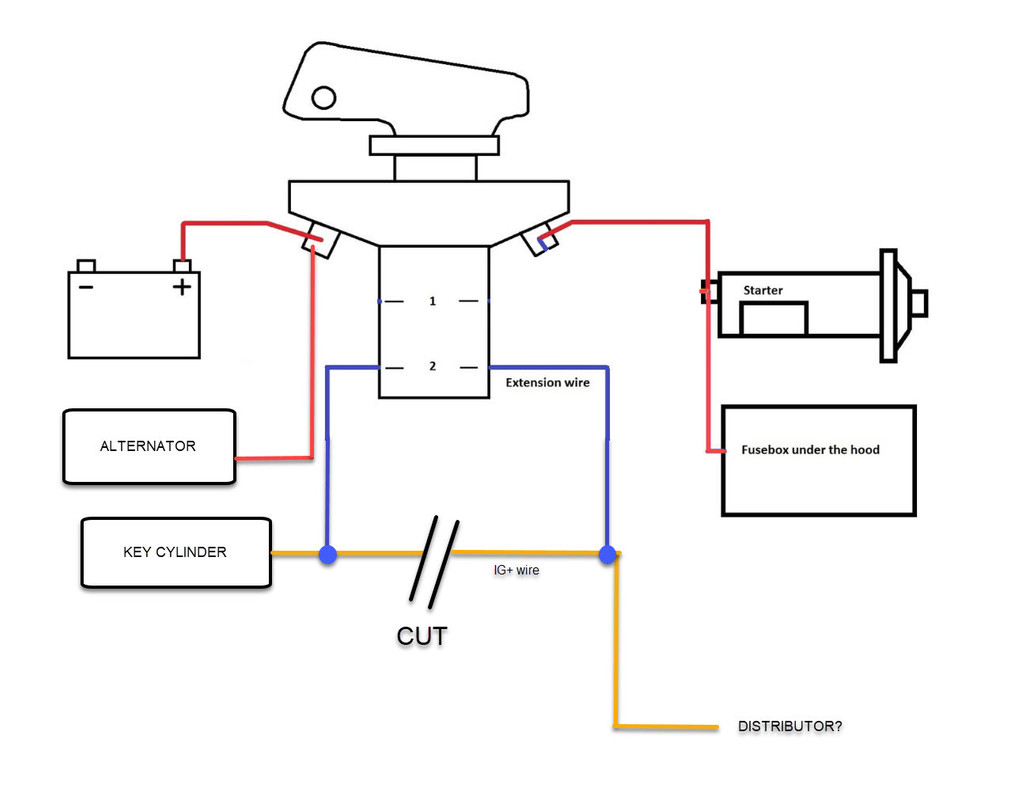 Ditch the ign kill circuit, connect key cyl source to fusebox as to remove another (common) point of failure

Been doing things way for 11 yrs of crapcan  racing + another 20yrs on other cars, with no failure of any alt or ecu, if there is worry about power to the alt after a bad crash, fuse that line @ 150a

Hi....That is a sharp arrangement. In your establishment, how could you wire the alternator yield? It's not satisfactory to me from the Blue Sea wiring chart if the contribution to the starter engine is wired from stud 2, or if that ought to be the alternator yield on stud 2 (or both?). In the event that you carry the alternator into the unit, what happens when the selector is turned to OFF while the engine is running?

If you're referring to the original image with the resistor, the one set of contacts is opposite (when the big switch opens the one set closes) allowing all power on the alternator and fuse box side to dump through the resistor to ground.

Alternator goes on the Starter and Fusebox side of the switch.