We're a new team, and we have picked up a $500 Buick for Lemons Rally.  We plan on attending Fall Fail-iage in Boston.  Problem is, we live nowhere near there (we're all in TN).  Our distance to get to and from the rally is longer than the rally itself.  We're trying to figure out logistics and was wondering what other people do.

Here's the ideas we have:

1.  YOLO - drive the Buick all the way there.
2.  Tow it to the start, but then what do we do with the tow vehicle and trailer?  Dragging a trailer all over the NE along the Lemons route sounds pretty crappy.
3.  Enter two vehicles, one being a nicer vehicle that can tow/recover, and rent a trailer if it all goes south.  Drive both.
4.  Same as #3, but only enter our Buick, have people rotate thru the Buick and keep the recovery vehicle close by.
5.  Something else???

We have 4 or 5 people - so no lack of drivers for two vehicles.  We already own a trailer/tow vehicle.  Just trying to get a feel of what other people do?

I live in Arizona, and I've driven to the start of all the rallies I've been on, 7 of them I think. It's usually a 2 day drive, sometimes 3 or 4 to get to the start.

Getting there is half the fun. 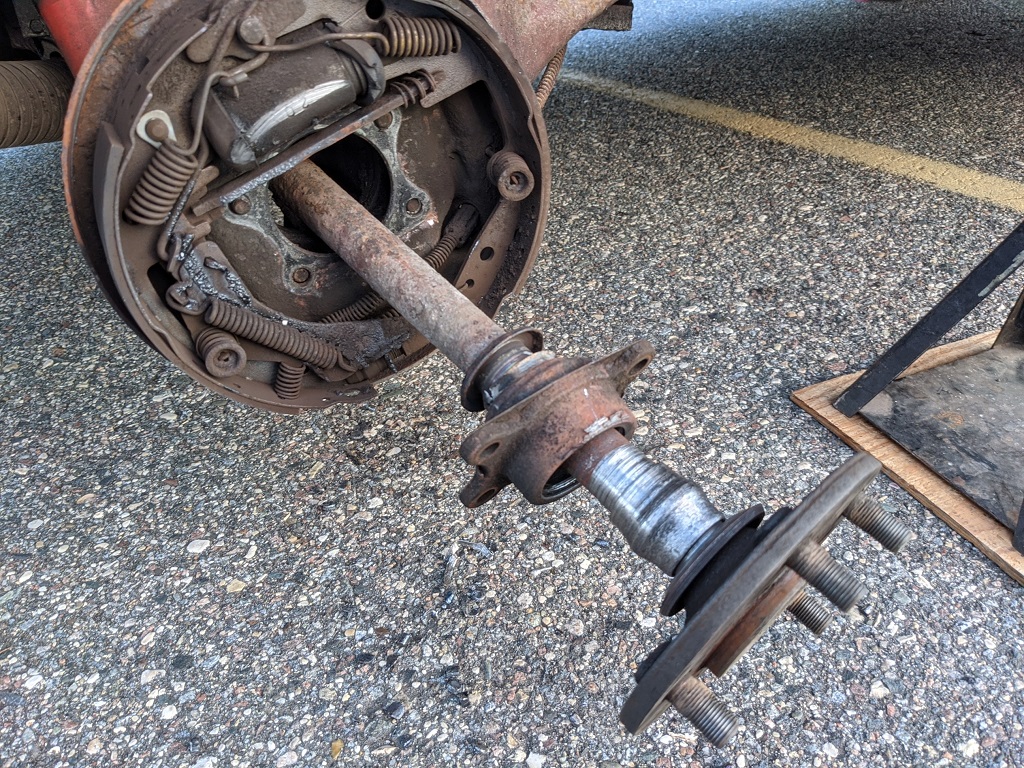 edit: ps. Make sure the wheel bearings have grease in them before you leave

I'm in favor of your first option, driving the Buick. For my first rally I drove about 1800 miles just getting there and back in a '70 International pickup and for the second a similar distance in an '82 Austin Allegro. In neither case was this the record for distance; as I recall there was a team from Canada that drove from about twice as far away for the first one. My third rally was local, which meant only about 200 miles of extra driving.

As squirrel pointed out, getting there is half the fun, so just think of the whole thing as part of the rally. I expect to drive about 2000 miles getting to and from this year's California rally. Still, with as many drivers as you have on your team, you may want to give serious consideration to your fourth option, too.

When the wheel bearing went out, I was over 1600 miles from home, on a side trip on my way to the rally. You can't buy wheel bearings for an early Tempest, you have to get lucky with junkyards, etc. But I got it fixed. It's a great story. If I'd hauled the car to the start of the rally, the thing probably would have broke when I was not real far from home, but also somewhere where I could not find parts. You just never know how things will work out, or not.

You only live once. Go for it.

Thanks for the input.  Looking forward to seeing if others post any thoughts.  I'm leaning toward bringing two vehicles mainly because of our team size.  I'm not sure it's possible to fit 4-5 people's stuff and tools, spares, etc. in the car.  The trunk and/or roof will have theme items bolted to it so we won't be able to store stuff there.  We probably won't finalize our actual logistics until closer to time.  Gas prices will likely be a large factor in our decision.  Taking just the Buick saves a lot of gas money.

I'd throw a hitch on the Buick, and tow a U-Haul trailer with my stuff, driving the Buick! Solves for space! Or you could buy a trailer and incorporate it into your theme.

First things first: There's no price limit for Rally cars.  Not sure if you kept it to $500 intentionally, or that's just what you dicked the seller down to, but I wanted to put that out there.

Sounds like you have little faith in the Buick.  It's a Buick!  Does it have a 3800 engine?  You'll be fine.  I'd price out what it'll cost to rent a truck and dolly vs bringing your own truck and trailer.  Might be cheaper, might not.  Is the Buick FWD?

How are you fitting everyone into the car during the rally?

We want to do a Lemons race in the future so we purposely are trying to keep the car close to $500...or at least maintain the "spirit" of a $500 car.

Our car is a 99 Buick Century - typical story of most of these cars - was someone's grandma's, they died, it sat for several years, guy on my team found out about it, we offered cash and got it.  It has the 3.1 V6 so still a reliable engine - not the famous 3800 but still good.  Our main issue we're running down right now is leaks and suspension issues.  We're leaking pretty much every fluid, but the engine/trans seem rock solid so far.  We've actually raced together before in another series so we're pretty comfortable with getting the car mechanically sound for the trip and aren't concerned about reliability.

Fitting 4 people into this car is no issue, just fitting 4 people with stuff is a potential problem unless we get really creative with what we pack.  We can probably pack fairly light on the clothing and tool side and get it to fit, but it'd be nice to have things like a full size jack, jack stands, etc. which we will be unable to carry with 4 people and stuff.  Being realistic we can probably fit a small mechanics toolkit and a couple of battery tools along with 4 small suitcases and that'd be it.  I don't think a trailer is an option because in true Lemons fashion the car is quite rusty.

How bad is the fluid loss? The Wedge lost about  a quart of engine oil and a quart of ATF and most of the brake fluid every day on the 2020 Rt 66 rally, but I didn't really have any issues with being able to keep it filled. Two years earlier, the NotDeadYet hearse needed a gallon of water about every hour, that was a bit more of a challenge, if you're in a small car. If you think you're going to have to get under there to fix stuff, then a big floor jack and stands is nice to have, but there are other ways to deal with it...I did a lot of work on cars before I ever got a floor jack.

having lots of clothes is over rated. And yes, thrift stores exist just for the purpose of getting a few more things that you didn't pack....

I think you can do it. If you need inspiration, just look up pictures of these fearless idiots! 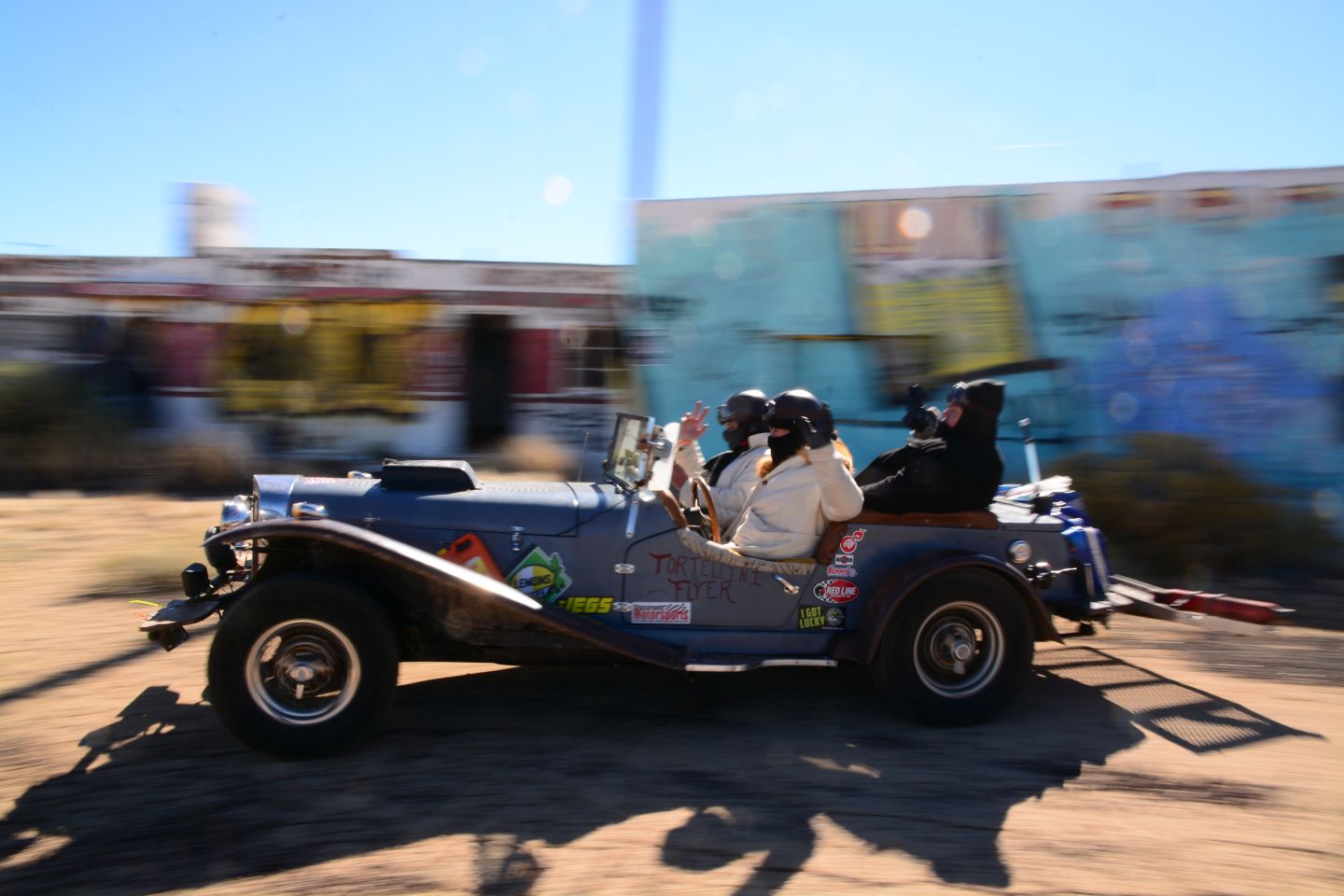 Honestly not sure on loss - we picked up the car about a month ago and just got it cleaned up and started driving it some last week.  We've put less than 100 miles on it so far.  Where it sat for so long we keep springing random leaks.  We've got a trans cooler line leaking at the radiator - I believe the seal/oring is just gone.  We have a coolant leak from a radiator hose that just sprung up.  Also seems like we've got a shot wheel bearing we just discovered as well.  Rear shocks are completely done -  we may not do anything about that but we are eyeballing replacing them because we can found clearance monroe shocks for $20 each.  Nothing concerning, we will get it fixed in time easily.  Thankfully the car has very good parts availability and everything is dirt cheap for it.

Thanks for the inspiration.

See if you can get a one-way rental for truck and tow dolly or just drive it the whole way.

One way is insanely expensive.  Honestly it's so expensive if we drove the Buick up without a support vehicle and broke down it'd be cheaper to fly someone down to grab our tow vehicle and trailer and bring it back up.  When I ran the numbers thru the Uhaul and Penske sites it's $2200-$2500 for a truck + trailer rental one way for the distance we need to go (Boston MA to Johnson City TN).  This is another reason we're considering bringing a support vehicle.  At least a uhaul trailer rental one way is "only" $500 or we could rig up a flat tow or something if we didn't bring our full size trailer.

several people have bought another crapcan on a Rally when theirs broke.

Honestly, you'll most likely be fine if the powertrain runs fine for at least a week and you can fix most of the current issues.  The car will likely start displaying some additional issues when you start stretching its legs, but if you daily it for at least two weeks, you'll probably cover most of everything.  As far as a jack goes, I highly recommend grabbing one of the little 1.5-ton aluminum jack from Harbor Frieght.  They're a little smaller and WAY lighter.  I keep my jack and stands on the passenger side rear foot well of my Baja, because I have other stuff back in the bed.  Since you have a trunk, you could hide those things (mostly) in a corner.  And there will be other cars in the rally with their own tools, so if there's something you lack, someone else may have it.

I do my personal clothing and electronics in two backpacks, and I wear pants for multiple days.  Other stuff is easy to pack.  Some things could be stuffed into the backseat.  My family did a road trip home from Atlanta with 5 people and all their stuff in a Chevy Celebrity back in the early 90's, and we made it without killing each other.  I'm sure you guys will be fine.

the other thing about crappy cars is that they last a lot longer than we think they will. I've been in several cars that I just knew wouldn't finish, but they kept on running, knocking rod bearings and al, and I got home. Just make sure the wheel bearings all have grease, you have  a spare fan belt, and a few other things are ok, and you'll make it back home again.

You can always add a rooftop luggage carrier.  I drove 4 people in a 96 cavalier from Ohio to Florida and the luggage acrrier was the hero on that trip. That era cavalier had little to no trunk.

Oh and no suitcases, everyone is in a duffle.  You can squeeze duffles, but not suitcases!

Triage. Figure out which stuff will kill you/drop dead on the highway, and fix those. Don't get distracted by trivia. Bottom up -- tires, brakes, cooling system, retain fluids. Suspension has to get extremely ruined before it falls to the ground, less of a worry. Electrics you can fix on the road. Engines usually limp, belch, stink, but run, with fluids in place.

I regret not being able to go this year. Yeah, gas is $$$ but driving is top priority for me. But I was involved in organizing a three-day tour that was to end at the very start of the Rally, juggled other sked stuff to be compatible, and then the tour got cancelled. So now I can't do either, aargh.

I was gonna drive the smooth and quiet Rambler, but that feels like cheating, but hey sometimes you gotta take the easy way out. But I just got a '61 Morris Minor, and it's even better on gas than the Rambler, so next Rally opp I'm there!

you can have that Morris running by the end of July, can't you?