Yea, probably could have, but this should look cooler and be way more work with likely little benefit.

Got some more time to work on the Scrap Metal Intake (SMI) and got all the runners and the plenum base made.  Mocked up with the TPI throttle body we're going to modify to work with the Cadillac computer.  It ended up being a little high, but this will clear our ghetto Jeep Liberty belt pulley tensioner.  Its definitely going through the hood a bit.  Plenum size is based on what pieces of scrap aluminum I could find around the shop, its going to end up around 3.3L. 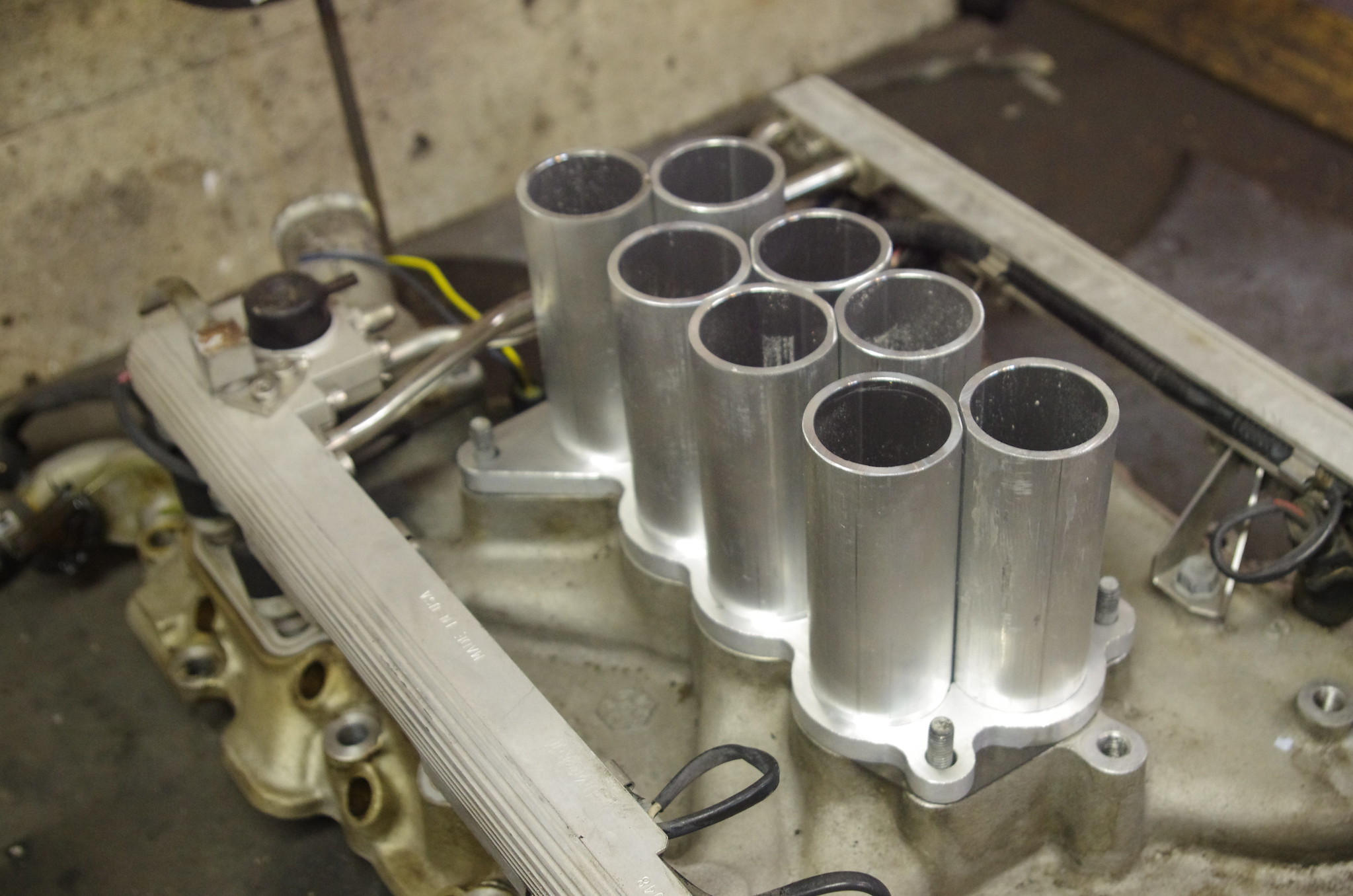 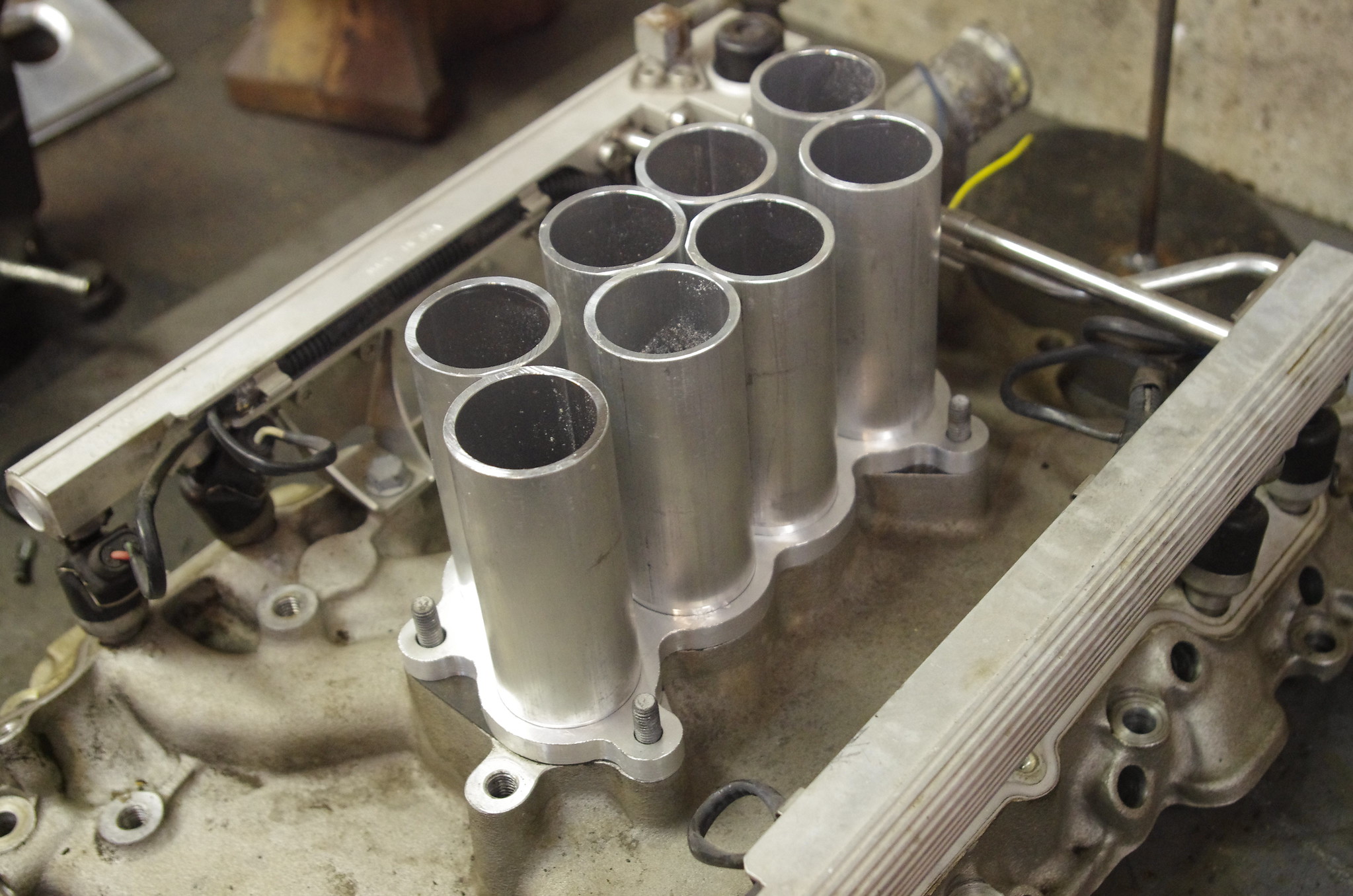 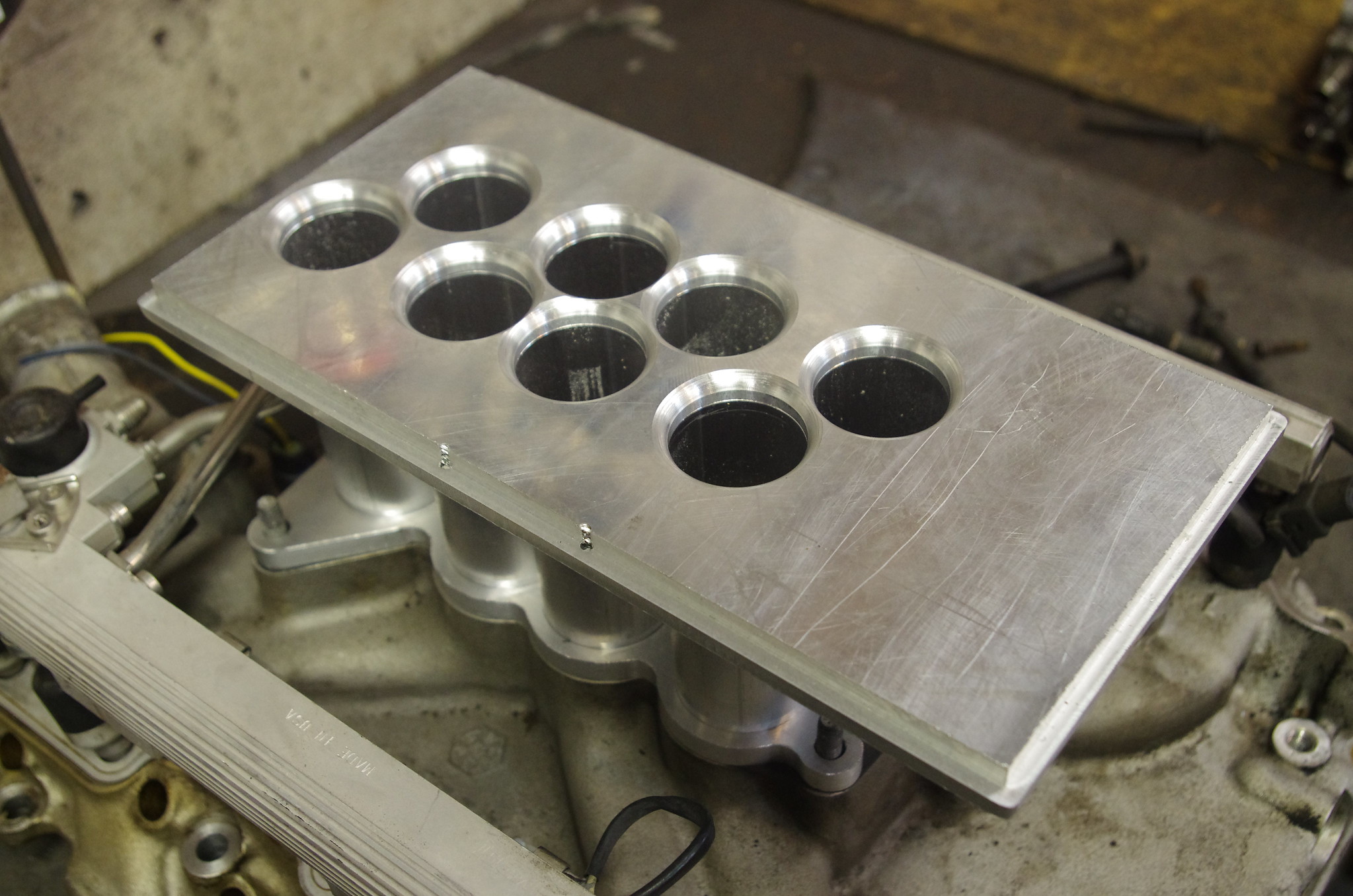 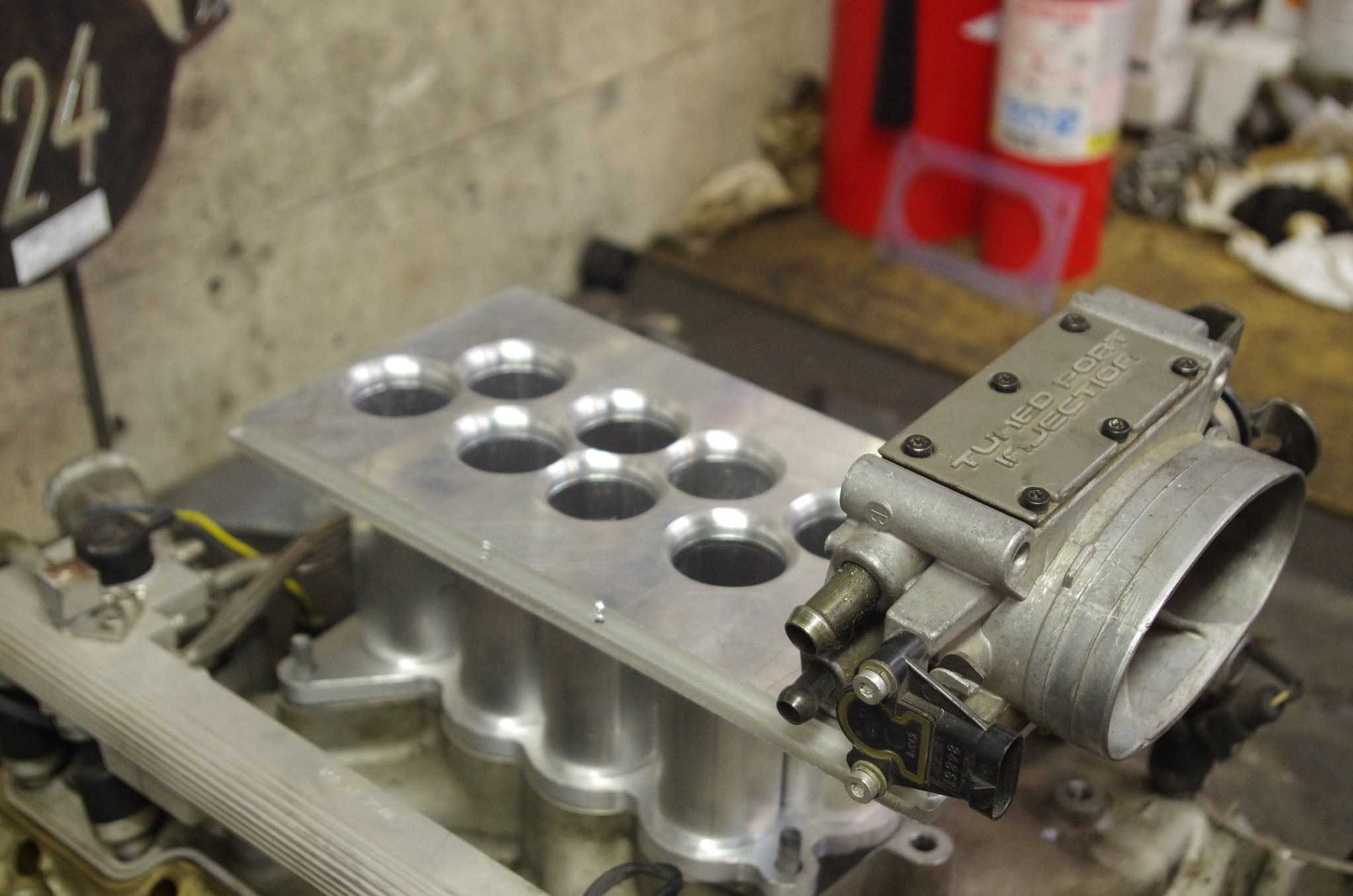 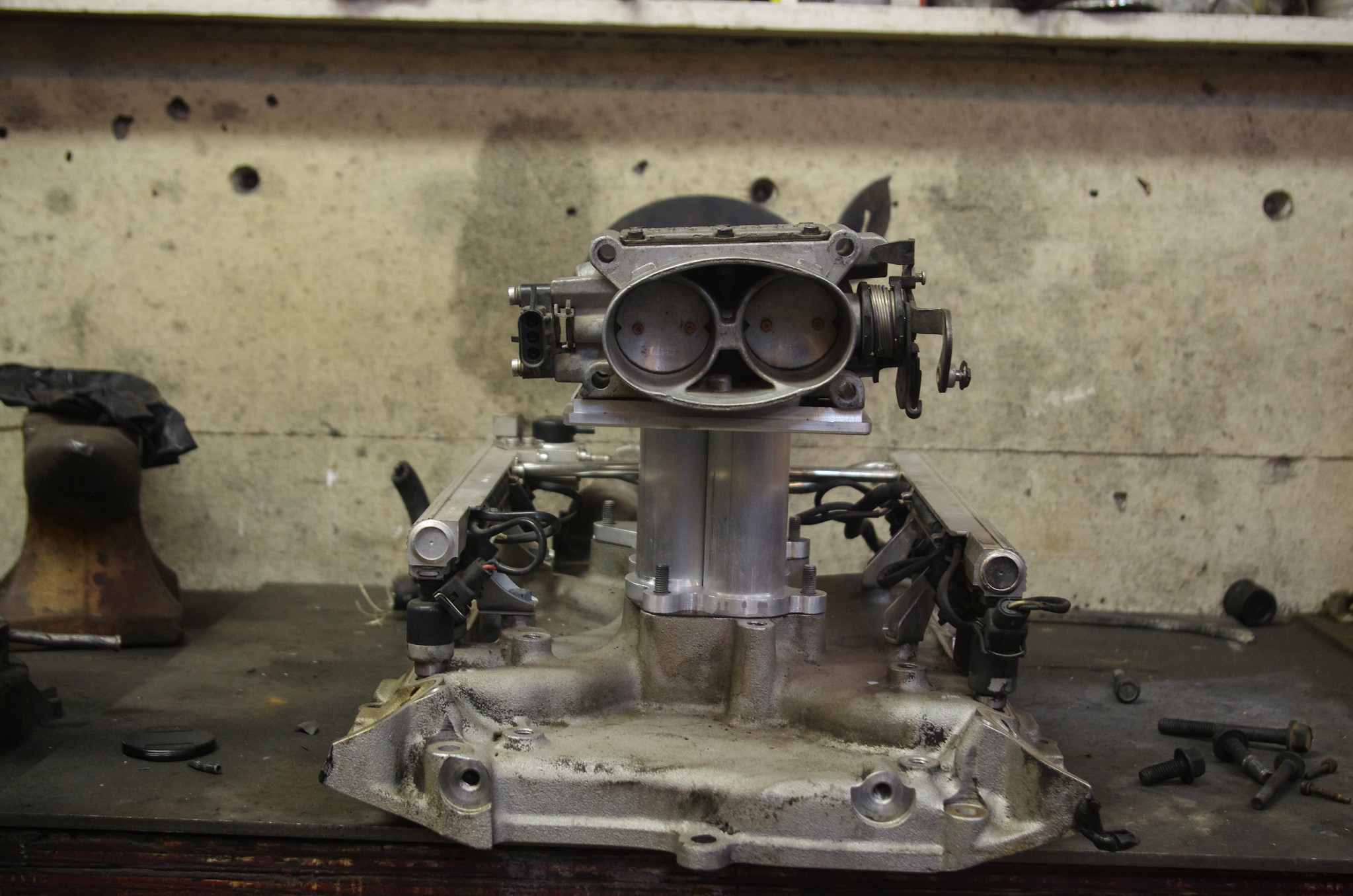 Love it, I'm super jealous of your fabrication!

good stuff, is that going to increase HP much?  I have one complete for an 88 305, computer too I think.

good stuff, is that going to increase HP much?

I mean, it LOOKS like it should make the car go faster...

Mocked it up in the car to check height and some angles, time to get out the sawzall for the hood once again!  Definitely going to stick through the hood a bit. 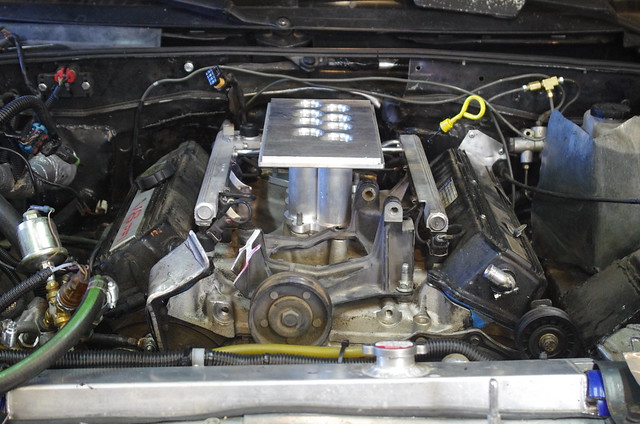 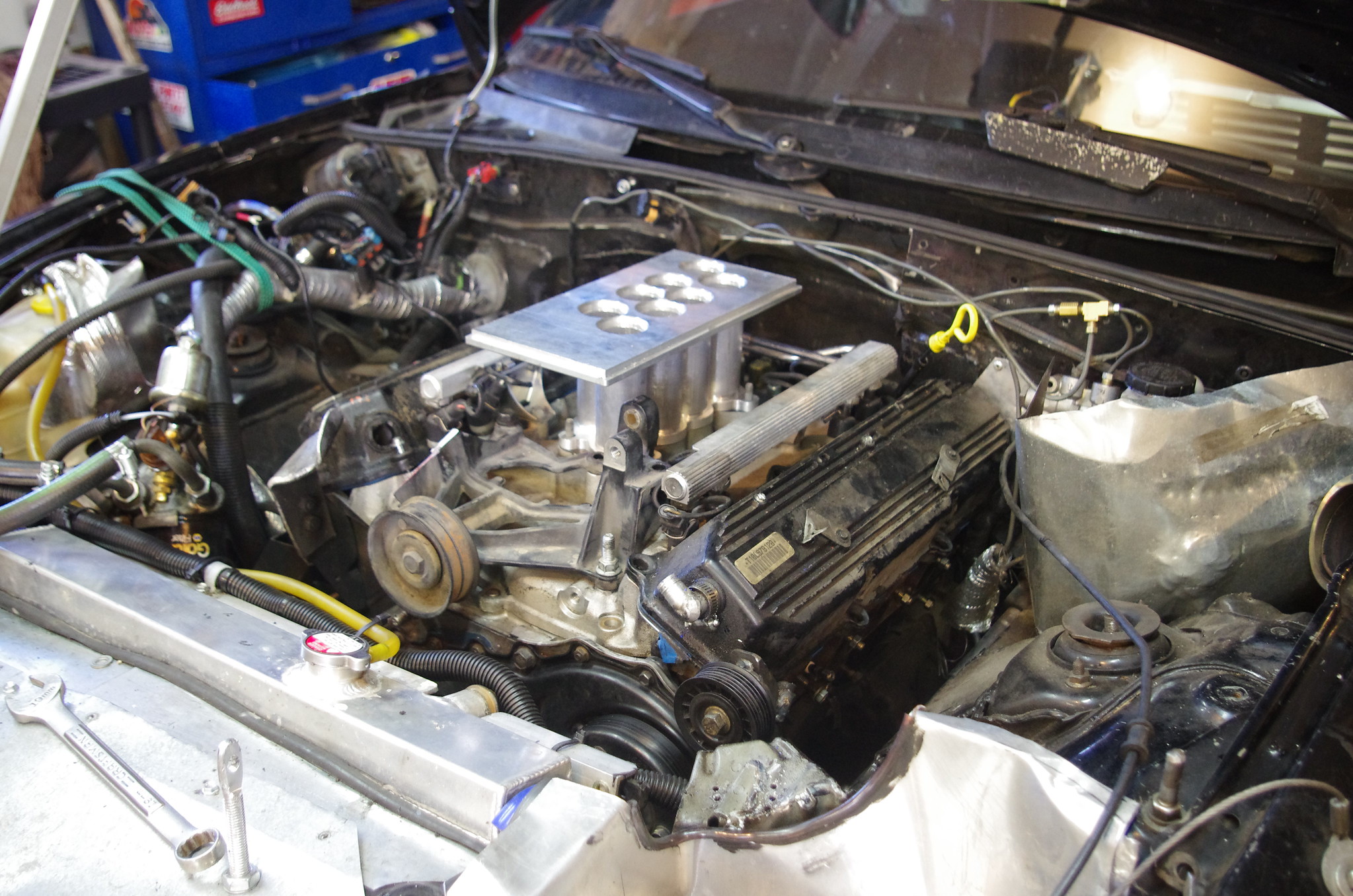 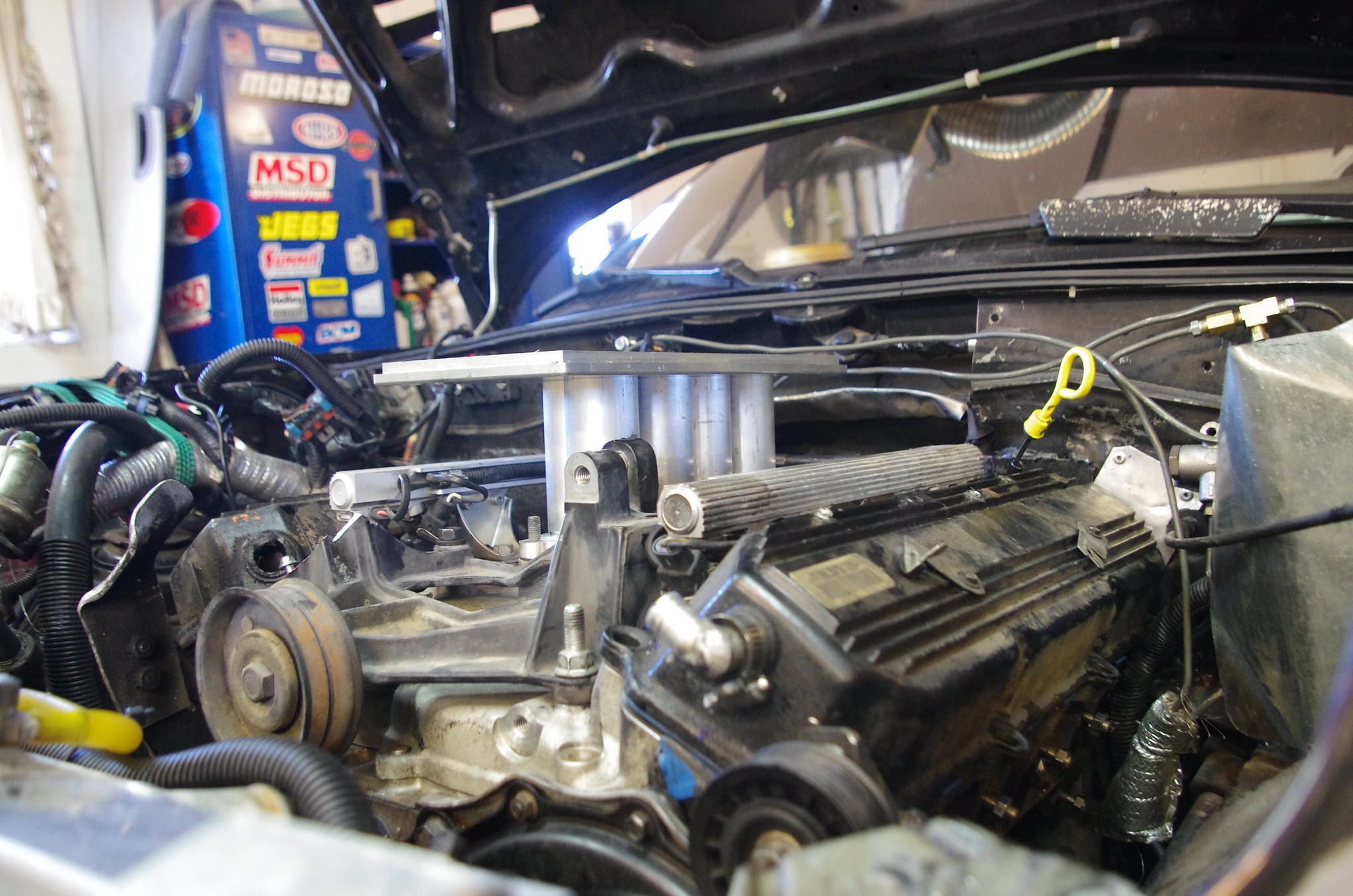 Still haven't welded the upper intake yet, but mocked it up again on the stand for a pic.  Also engraved the plenum top, should look real fancy with some paint filling in the letters. 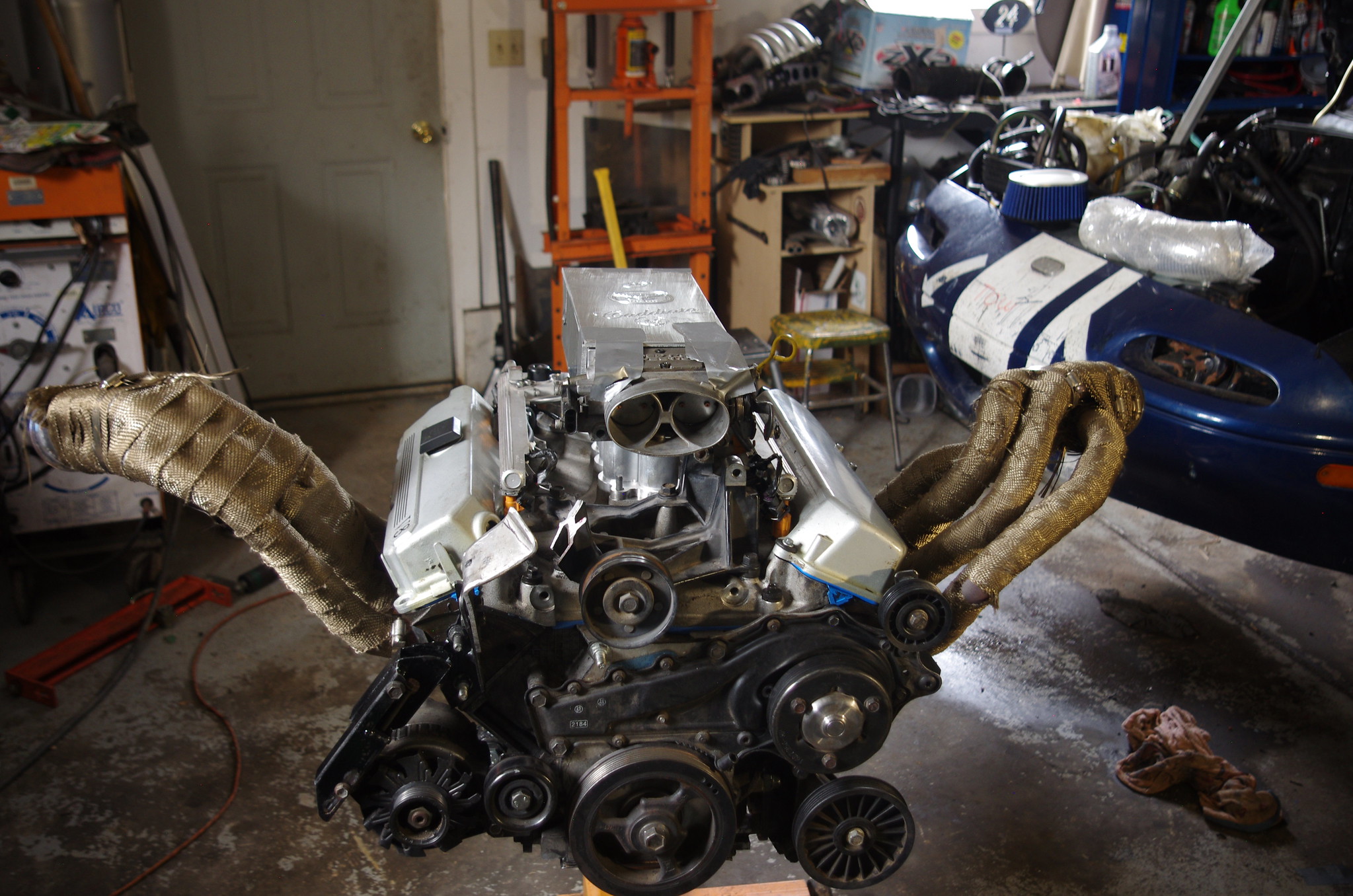 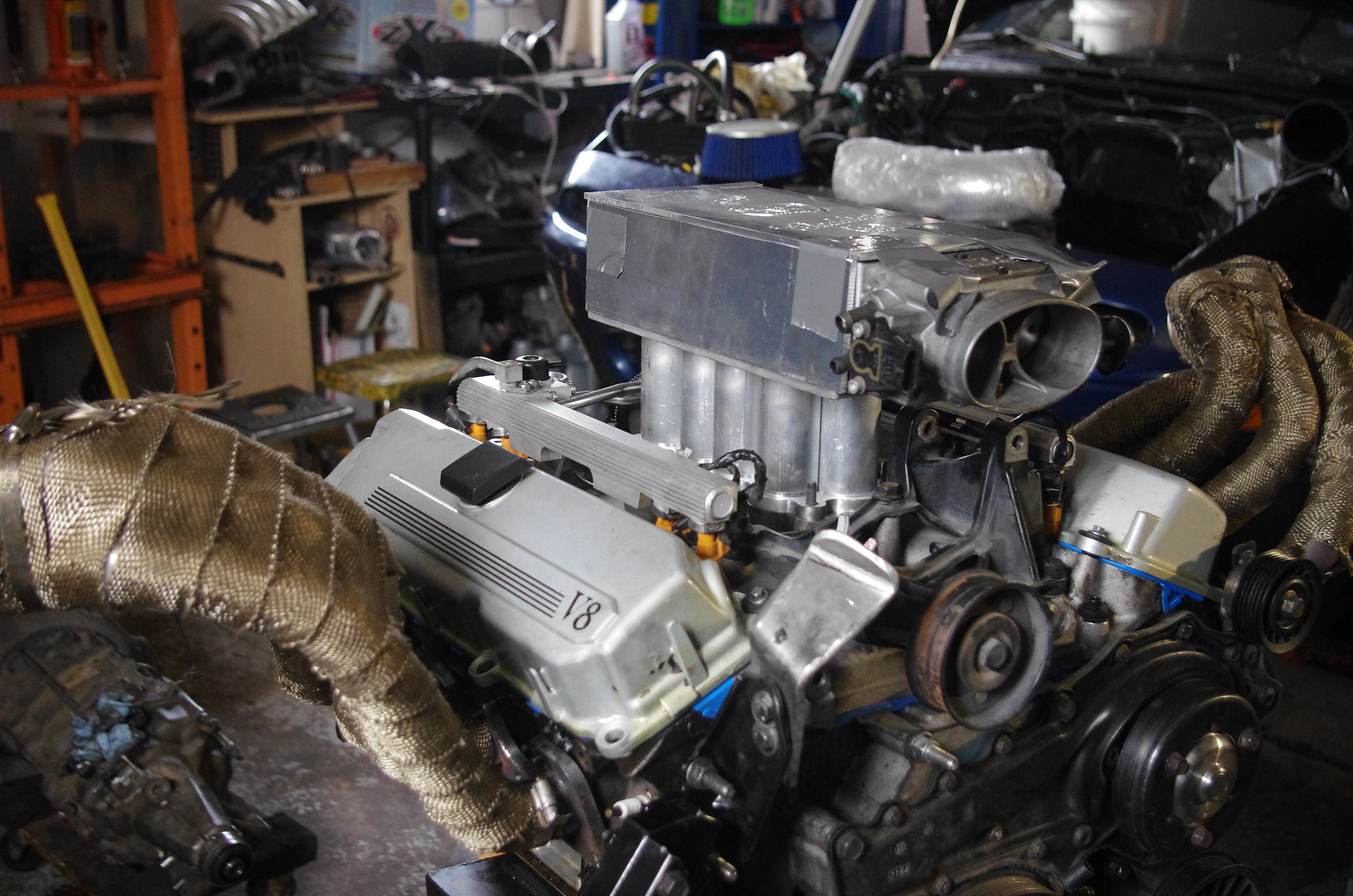 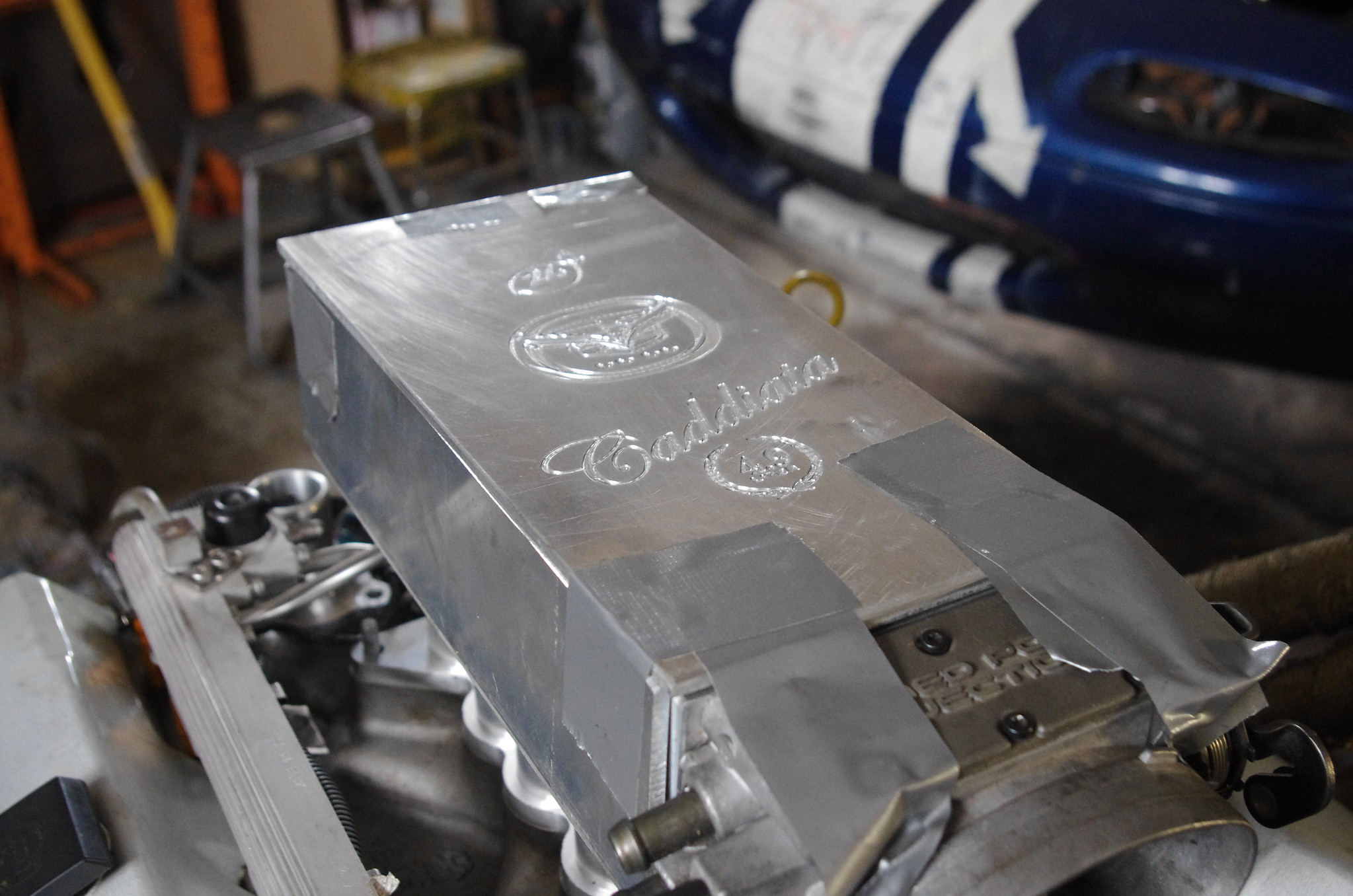 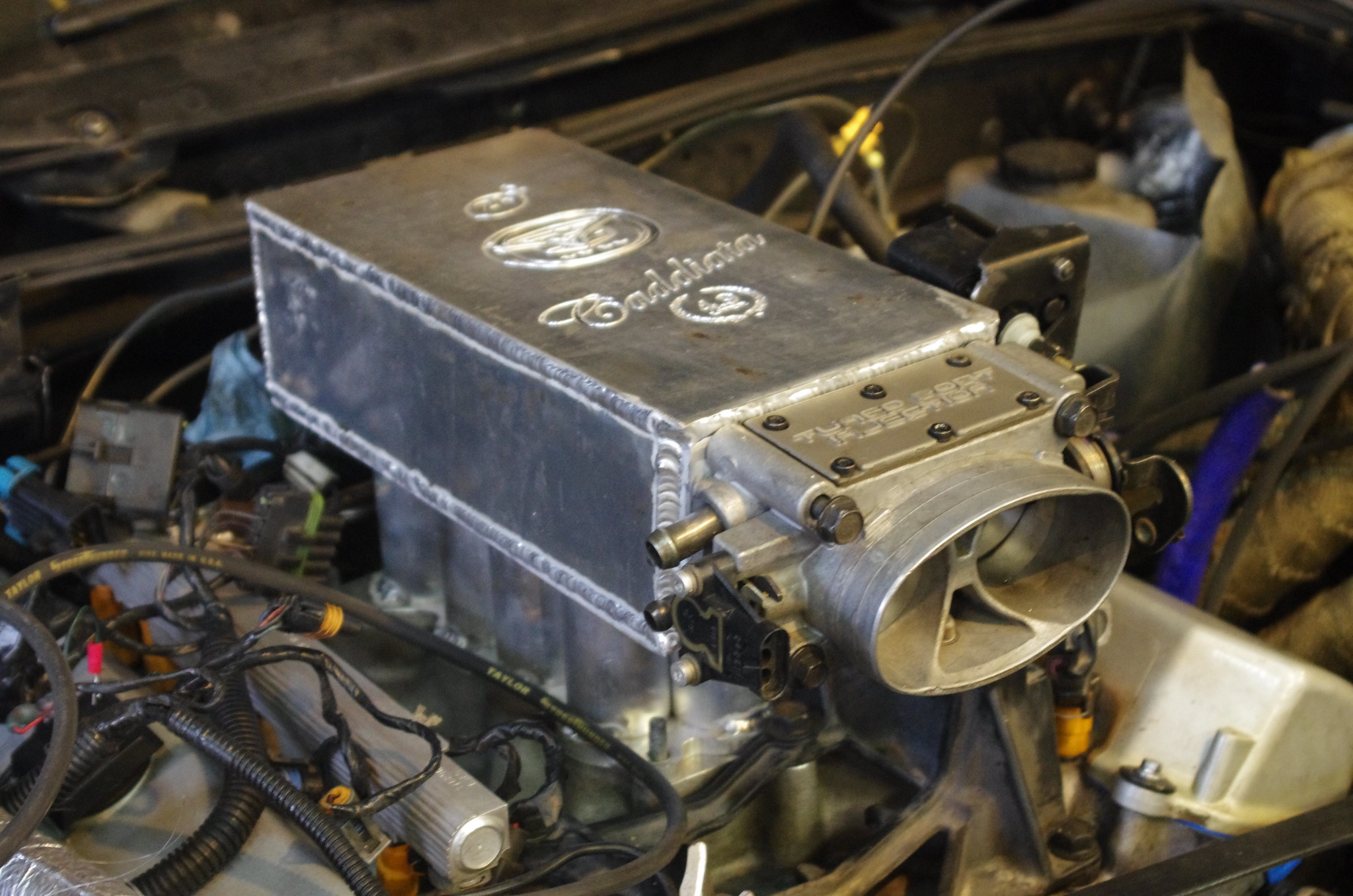 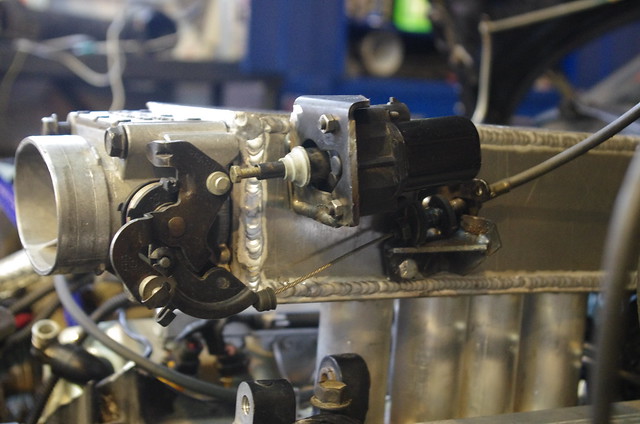 Much better with some paint.  The classiest high rise intake ever. 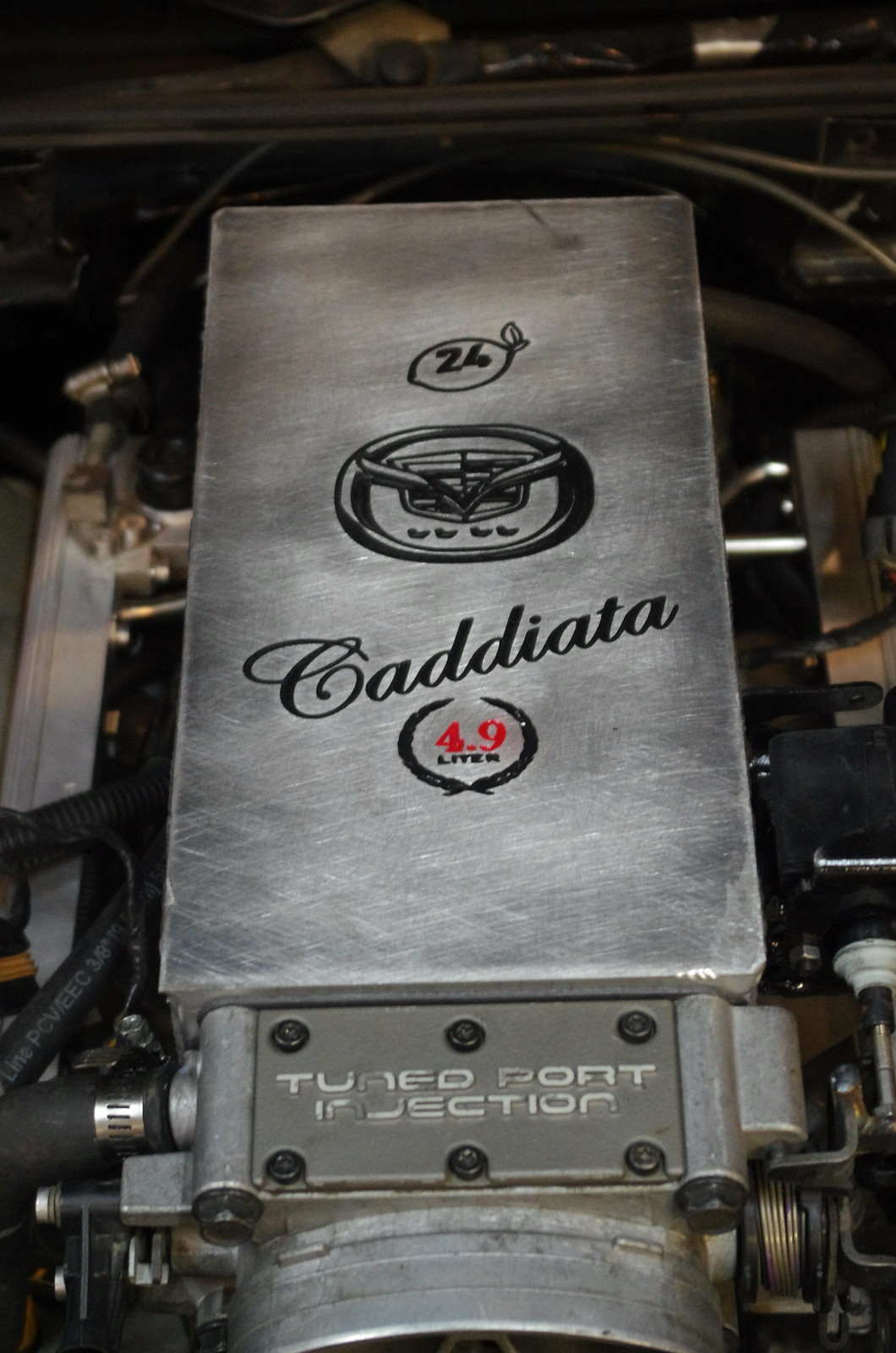 It runs!  I'm taking it out for a track day later this week, we'll see if it runs any different.  Best scenario is it makes a bit more power, but I'm not expecting much.

Well, another partially successful but very fun weekend was had at the BFE GP this past weekend.  The new intake and ported heads definitely made a bunch more power up high, the motor really rips now.  We beat on it hard the whole weekend and the motor took it like a champ.  That's 3 races so far without a single engine related failure, which just goes to show that the Cadillac 4.9 is obviously the best pushrod motor to come out of Detroit.

We got the car into B class with zero penalty laps this time instead of A after bribing Phil with this:

There was a charging failure Saturday that cost us about an hour of time to figure out, the charge wire connector on the alternator had broken off.  We pushed the pace hard after that to try and catch back up to the B class leader.  We were down about 23 laps after the failure, but managed to work back up to within a few laps with over an hour left by the end of Sunday.    At about an hour left, the brake pads completely disappeared at the end of the long straight and our driver took a short cut over the grass at about 120mph.  Somehow he kept the car upright and got back on the track and back to the pits, but it sounded pretty terrifying.  We did finish out the day after a pad change, but ended up around 15th overall.

The car is super fun to drive and was easily the fastest car out there this past weekend.  We were stopping about every 30 laps for fuel which is probably too often, but was also fun to cycle drivers through.  Its quite exhausting to drive the car at the limit with the huge tires and non-boosted brakes, so the rest was welcome.  Fuel plus driver change was under 2 minutes each time.  Fastest lap time of the weekend was a new track record, 2:06.

It's no hellcat Matia swap, but it gets the job done.

The Pinto wagon in the background really makes this picture come alive.

Also, good job on not cracking up the car or worse with the brake failure.

Was the object of the video to get a shot of the ENTIRE interior of the car?  The sound is glorious for sure.

We finally did it!  Managed to keep it working long enough to pull off a Class B and overall win.  We drove it for the last hour and a half with zero brakes after a hydraulic failure, luckily we had about a 10 lap buffer when it happened and could just limp along for the remainder of the race.

Once again, the motor had zero issues and ran awesome all weekend.  We could do about 30 lap stints on the stock tank, but we got our pit stops down under 90 seconds.  That combined with running quick laps helped us keep up with everyone else.

This might be the first time a Cadillac HT powered anything won a race, so that's neat 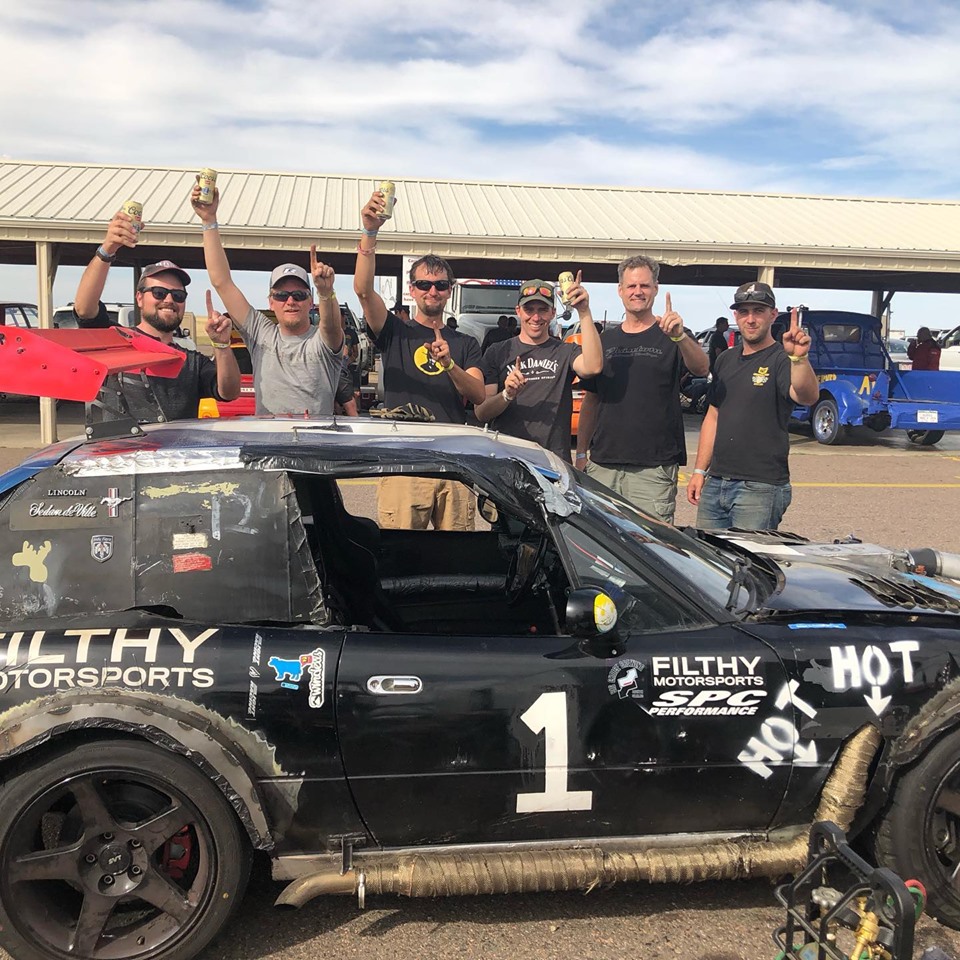 Congrats!  Great job on the car and the race.

Does the stock Cadillac ECM work with a manual transmission?

Yes it does.  Just like most old ECM's, you can basically just tell it that it's in Neutral and it will run normally.  Technically, there are some tables in the ECM that come in effect while it is in gear and at speed, but they deal with lean cruise and decel fueling and don't really affect run ability for the track.