If you're looking for a regrind of the stock cams, I can personally recommend Schneider here in San Diego.

You do realize that cam profiles are not their issue, right?  Just asking...for a friend.

I didn't think you lacked for HP in this car.
Exhaust ports  flow great because of the heat/expansion, unless you are doing nitrous,
no reason to bother with them.

More power is always more fun.  While I generally agree that porting on most heads probably isn't worth it, these heads are extremely restrictive stock and the motor basically chokes out after about 4k rpm.  Those EGR ports were right in the high pressure roof area of the middle cylinders' exhaust ports and definitely changed the flow characteristics between the cylinders.  The exhaust port throats were also at about 70% of the valve diameter, which is crazy tiny compared with the usual ~85-90% goal for exhaust valves.  The intake side wasn't nearly as bad, but the valve was very shrouded and there were sharp edges right next to the valve that would definitely affect the flow for the intake charge.

The idea is that this porting work combined with an allante intake that we just picked up after a heads-up from Judge Phil will make some sort of difference.  Maybe it will explode faster, maybe it will last and we'll just be faster, or maybe it will just be the same, who knows.  Its fun modifying stuff, and even more fun to go fast. 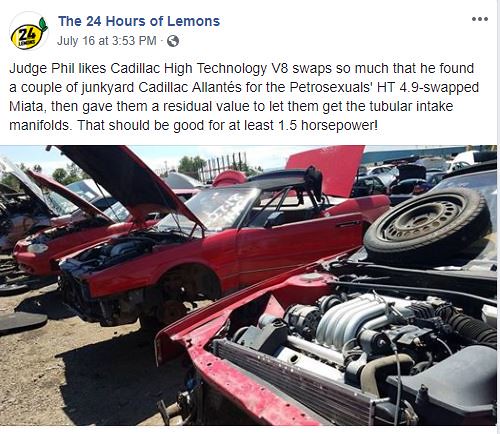 So we're starting to get the car prepared for the October "Get yer Phil" race at high plains.  One of the issues we decided to tackle was the shocks.  The shocks we used in the last race were some old, original Bilsteins that were either completely blown and non-functioning, or leaking oil and not really functioning anyway.  Only reason we ran them is that they had come with heavy springs, which was needed with the extra weight.

We're pretty used to racing with blown out shocks, and have never had anything but that on this car, so we figured it might be neat to have some dampening for a change.

Bilstein charges about $110 per shock to rebuild these 46mm shocks, which is both more than new shocks and WAY more than whatever budget is left.  They use a fancy shock dyno and custom machined fittings to rebuild these, which is why they're considered "factory rebuildable only".  Instead, we hacked these up and welded some bungs on the bottom in order to re-charge them after reassembly.

We'll have fresh-ish shocks for the price of a few o-rings and some oil, so that's neat.  Might even mess around with valving some day now that they are "garage rebuildable" converted. 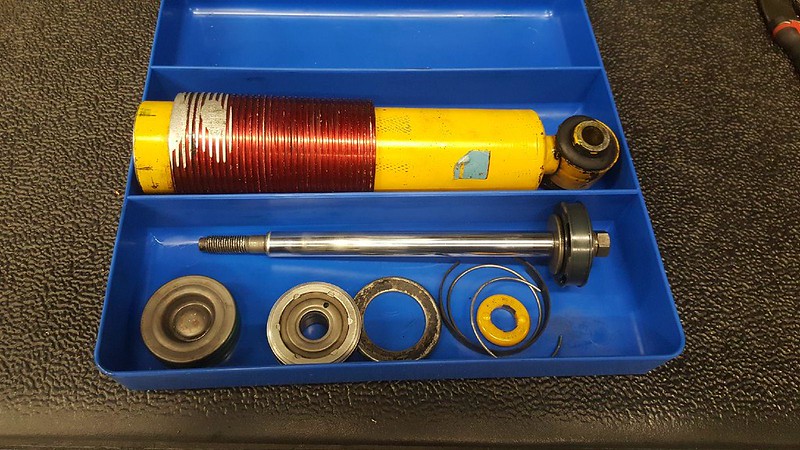 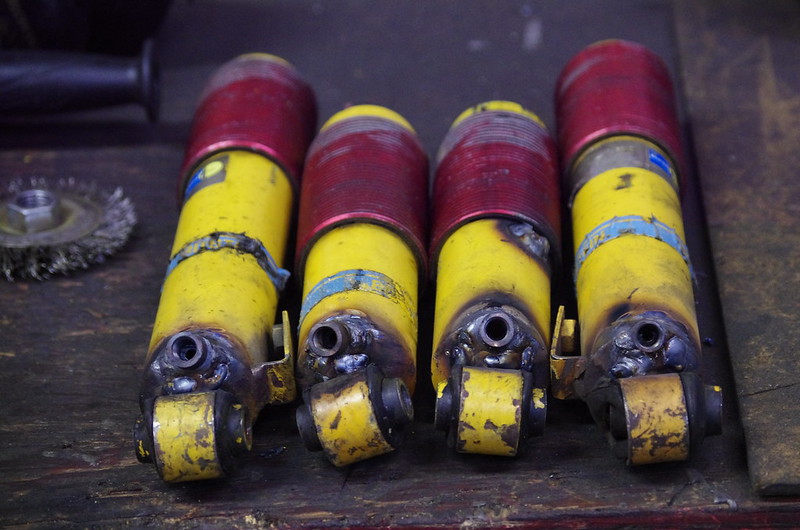 Shocks are all back together and sealed up.  No idea how long they'll last, but they're better than before with fresh oil and a fresh charge.  They definitely look lemony enough. 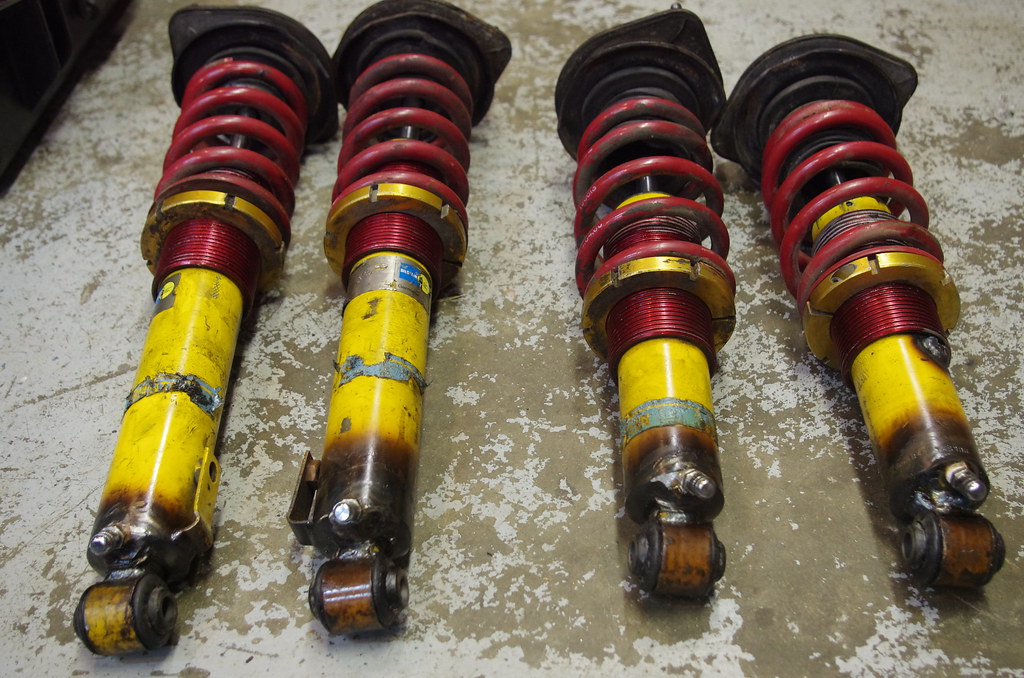 Well, the shocks worked.  Before the first pit we were in first, but had to stop for fuel after about 25 laps.  After that, we had another rear hub fail that put us about an hour behind on Saturday.  Even without that, it would have been tough to keep up with the teams in front due to all the fuel stops with the stock miata tank.  We weren't sure what caused the failure and only had one spare, so we took it easy for the rest of the race to get everyone some drive time.  For the fun of it, in the last hour of the race, we let our fast driver go for it and he beat the previous lap record by almost 4 seconds!

Overall it was a super fun weekend and awesome weather, so nothing really to complain about. 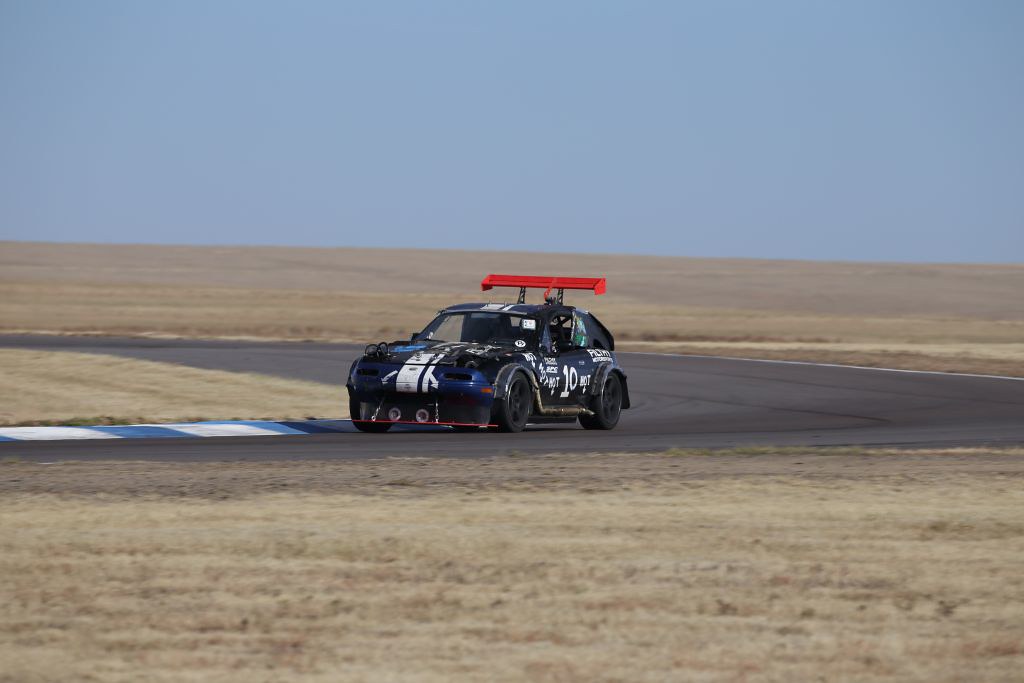 It's funny you mention that. We were having ignition issues all weekend, but I was desperate to try to get them fixed so I could at least go back out for 30 minutes and attempt to beat your 2:12, or blow my old motor trying.

Then I saw you reset it to 2:09 and I gave up all hope lol. Ultimately we never fixed the car so it was a moot point.

It was actually a 2:08.8 according to the results.  This has got to be the only record an HT Cadillac powered anything has, other than warranty replacements.

I was hoping to see you do a fast lap out there too, the 928 sure sounded fast!

Jeez, 2:08 is even more unattainable

And thanks! We got a ton of comments on how the car sounds, so that made an uneventful weekend a bit more encouraging. One of the corner workers even came by to give us props on the audio lol.

I managed a 2:14 on Sunday, shifting 1000rpm below redline, so I was confident I could get a 2:12 if I hammered down, since we're gonna pull the engine this winter anyway.

Hopefully we'll get a chance to fight you for it next year!

In my one experience at HPR, I've found that bravery into turns 4 and 10 was heavily rewarded. Turn 1 was another section that I saw a lot of improvement in when done right vs. wrong. Also, Chris Chrome was full of shit when he said that he could flat-foot turn 7 up the hill. I had a triple digit code-brown moment into the weeds when I tried that in his E30. ;-)

I've got really nothing to add to this conversation other than I love everything about this Miata and feel that it fully embraces everything that is Lemons.

I did NOT claim I could flat foot that corner.   That was the dudes in the Subaru.  Once we realized they were running 2:20’s and didn’t really know what they were doing then their comment made some sense.  Of course that wasn’t obvious till AFTER your stup... er Heroicism proved they were wrong.

There is definitely some corners you can take a LOT faster than most drivers are willing to try.   WRL gives some freedom in pursuing the limits without significant penalty.

I tried going flat through 7 once. It ended in a four wheel drift towards death when I had to lift as I came over the crest.

There are some bumps on the outside of 7, turning in early made it possible to go flat out in 4th there in the Caddiata.

And yea, HPR is kind of fun with all the high speed corners and the elevation changes, definitely a challenging track.

I did NOT claim I could flat foot that corner.

I know that, but it's more fun to blame you instead.

That was the dude in the Subaru.  Once we realized they were running 2:20’s and didn’t really know what they were doing then their comment made some sense.

Just goes to show you, never judge a book by its cover (e.g. a flashy new BRZ with all kinds of sponsorship stickers and fast talkers that runs +2:20)

Sounds like you guys weren't trying hard enough then. I was able to take almost every corner flat out, apart from six, eight, and eleven. Granted, the truck we were racing had like 50hp, but still.

Sounds like you guys weren't trying hard enough then. I was able to take almost every corner flat out, apart from six, eight, and eleven. Granted, the truck we were racing had like 50hp, but still.

Video of the fast laps at the end of the race, the 2:08 is in there somewhere near the end:

Nice driving.   That track is a lot of fun.

Nice one. Good to know you got the Bilstein shocks fixed. By the way, great video on the fast laps.

Video of the fast laps at the end of the race, the 2:08 is in there somewhere near the end:

yeah not sure where that is but we do NJMP and there's probably 140+ cars out on the track. It is rare to see a full straight w/o a vehicle/.

yeah not sure where that is but we do NJMP and there's probably 140+ cars out on the track. It is rare to see a full straight w/o a vehicle/.

Yea, it was the first time Lemons has run a second race in the fall at High Plains Raceway in Colorado, and the entry numbers are always lower at the Colorado races anyway.  That video was also at the end of the second day, and I don't think the race started with more than 50 cars, so it was definitely empty.

So the Allante intake that we got from the junk yard at Judge Phil's suggestion would put the throttle body basically underneath the windshield on the passenger side since it was designed a transverse mounted setup.  We're chucking the upper allante intake in the scrap bin and making our own forward facing upper intake, utilizing an old 305 TPI throttle body.

The allante intake has individual runners for each cylinders rather than the old 2bbl carb-like setup that came with the stock 4.9.  The runner length on this custom setup will be quite a bit shorter than the stock allante had, but according to some quick calculations, this new length should be pretty decent in the rpm range we run the motor at. 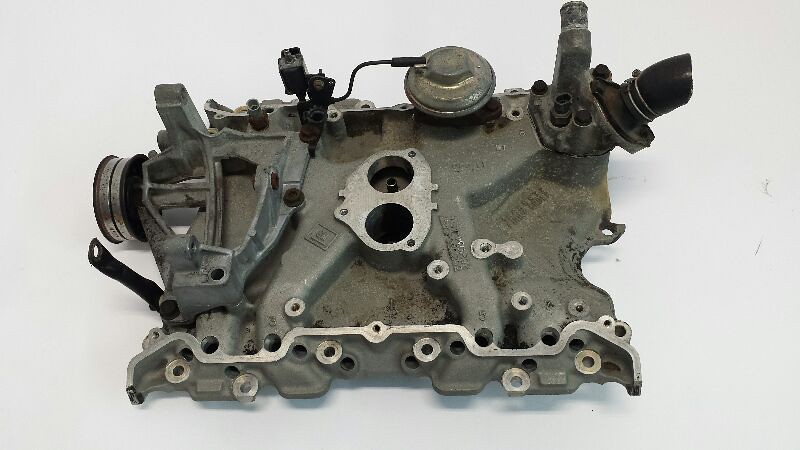 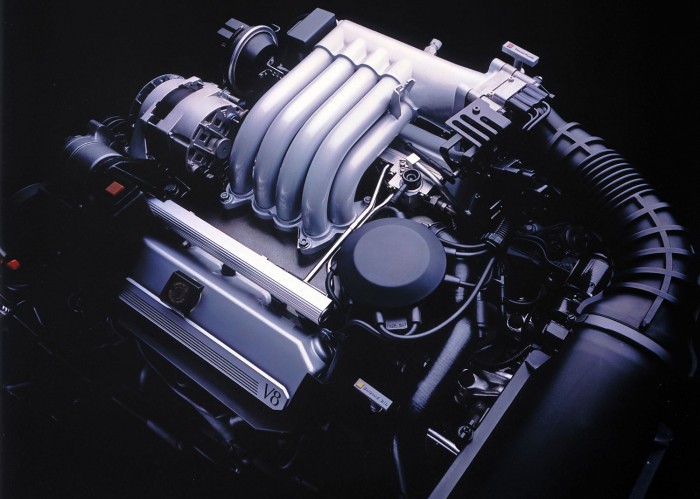 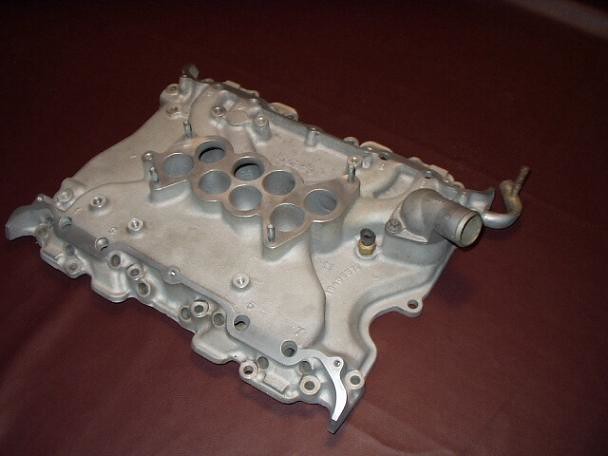 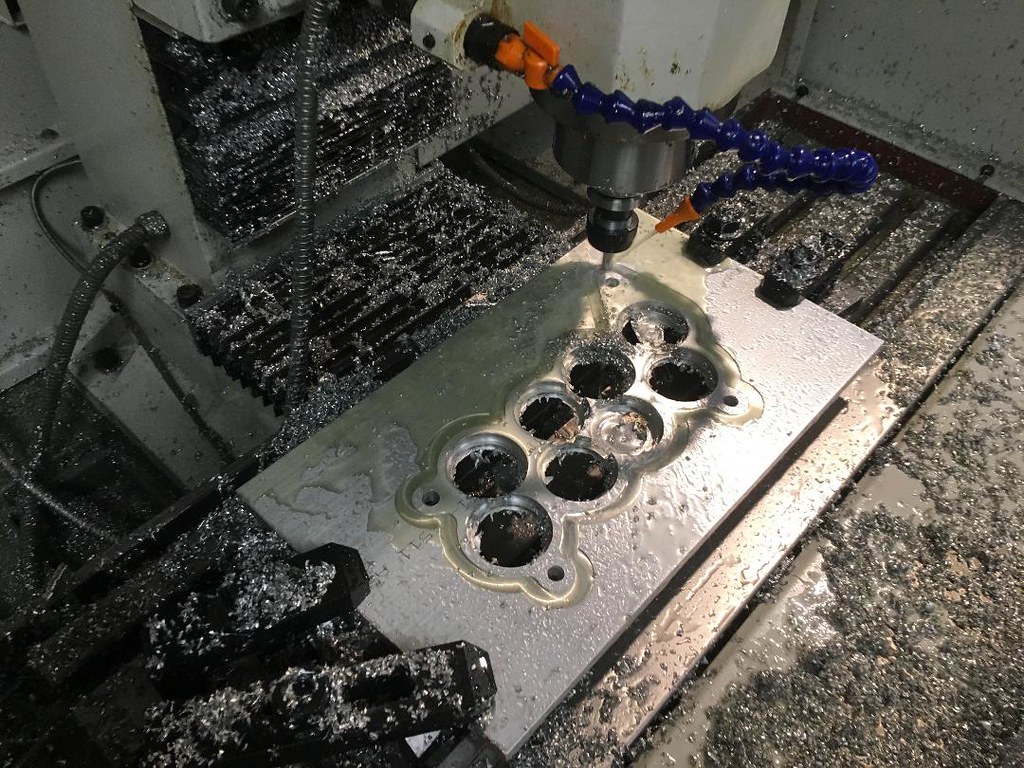 You couldn't just turn the stock upper around and re-jigger the mounting holes?